And we’re #CharmeD again. 8 months after the season 3 finale wrapped Charmed returned for a new season and it was a whole new show. Well-paced and well balanced the season premiere brought fans back to the glorious days of season 1. Kevin Dowling directed the episode, written by Aziza Aba Butain and newly appointed showrunner Jeffrey Leiber. 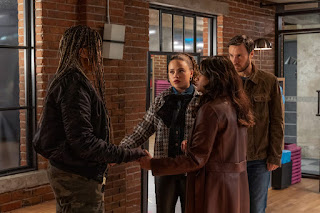 Charmed’s writers room had a tough assignment entering this season. The long lost sister plot was already used and with Madeleine Mantock leaving they had enormous shoes to fill. So how did they master the season premiere, quite well I have to say. The episode made mostly sense storywise, Lucy Barrett’s character fit in well and the emotional resonance was dosed pretty well. Charmed season 4 picks up 6 months after the demise of Macy and we find Mel and Maggie in different places on so many levels. The time jump was a smart decision. Having such a huge character pass away really puts a burden on a show and picking up right there is a tough road. A road filled with tears and anger which can be a major downer on a show and while it is important to mourn it would’ve taken over the show. Yet the writers didn’t forget to mourn in this episode. The sadness was palpable and Macy’s absence left a strain on Mel and Maggie. I’ve read comments comparing their reactions to the loss of Marisol and I can’t agree with that. Yes, Mel and Maggie were at odds in the Pilot episode but the trajectory of the characters was different. Maggie tried to move on and live a life while Mel was obsessing with finding Marisol’s murderer. This time around Maggie tried to gain Mel’s attention with the dangerous demon hunting and moving out, while Mel pushed her emotions down distracting her with numerous flings. Maggie wants for Mel to fight for them, while Mel seemingly lost the fighting spirit. Even when they were facing the Negative Force, the old Mel would go into it smash it all apart just to safe Josefina, this Mel was too cautious too afraid.

I was positively surprised by how well Melonie Diaz and Sarah Jefferey interpreted all these emotions and how they worked with a lot of small details into establishing the strain on their relationship. It felt very honest and very sisterly, as some pain and pettiness emerged during their interaction.

And while all this was going on between the OG sisters with the intervention of some magical faith, as Maggie calls it, they meet each other in Philadelphia were they seemingly reactivate the power of three during a interaction with Kaela, Michaela Danso. Overall I enjoyed Michaela’s interaction into the Charmed world. The only scenes that were bugging me were the ones during opening. Those two scenes just didn’t feel right. I understand their purpose and how it should’ve been a solid starting point but it just didn’t work out for me. The writers did succeed in their intention to bring Michaela closer to the viewers but it didn’t click with me. Lucy Barrett’s Michaela Danso is a mechanic and cancer survivor from Philadelphia. Lucy Barrett definitely brings in a different energy to the show and her response to the whole witch thing was as authentic as possible. Overdoing would probably ruin the balance of the episode and the dosed performance Lucy provided worked really well for an episode like this. Lucy landed all the zingers and provided strong character defining moments when the script asked for it. Kaela’s manefesting power being this episode “main villain” was a smart move. It provided levity to the episode and pushed Mel and Maggie out of their comfort zone and their “secrets”. Mel and Maggie opening up to Kaela at the end was a sweet moment for the three of them, it was an interesting mixture as it did created a connection between the three of them, showed more of Mel and Maggie’s grief while also putting a major burden on Kaela, which pushed her to leave the sisters at the end.

The introduction of the Blue Chamillia and Roxie were also positive developments featured in this episode. Shi Ne Nielson’s Roxie has an interesting energy to her, she seems so strong and outspoken and simultaneously unborthered. She is supposed to be a majorly recurring character and I can’t wait to see her interact more with Mel inparticularly.

The second thing that really bugged me in this episode was the Harry stuff. While I understand his distrust and researching Kaela it was a bit over the top and creepy? Also he did it all too swiftly, I get he has connections and possibilities as a Whitelighter but it felt all too rushed and easy. Meanwhile, the Half-Whitelighter Jordan proved to be part of a bigger story during this episode. During his shenanigans with Macy and the Pixie Pledge ceremony Jordan witnessed benevolent creatures emerge a dark side. As we find out courtesy of The Tallyman. It is an interesting story that the writers introduced and it hopefully keep this mysterious energy going forward, cause if we start turning good magical creatures bad and mad the options are unlimited.

It was great seeing Emily Bader back as pixie Chloe. What an endearing energy she has and her interactions with Jordan were also adorable. But Chloe didn’t just bring the cheers, she also brought the emotions. The emotional finish between Chloe and her sister was heartbreaking. Really hoping this isn’t the last we’ve seen of her.

And while most of the fandom asks themselves how Kaela is a Charmed one and connected with the sisters, my main question is why? Why does she exist if she is not a sister? The questions are definitely intervined but according to the showrunner we’ll have to wait a bit to find out the answers. During this episode we found out that Kaela is a cancer survivor, for 5 years cancerless. Did Macy donate her blood or bone marrow during her studies? Kaela was also found at a fire station as a baby, parents unknown. Is she a blood relative? A lot of questions raised in this episode and we are all eager for answers.

– Josefina is the best. The energy she brings to the show is just a blast, she always makes me laugh. The bit with her cut off arm was hilarious. It was sweet to see her carrying about her cousins and the bois. GIVE HER A SPIN OFF!

– Jordan cleaned up nicely in that suit, bold choice casting department. I hope though we get a couple of flashbacks revealing Jordan adapting to his powers. And is it a coincidence that Jordan was involved with both magical creatures going bad and mad? Is the Tallyman a dark Jordan?

– Can we tone down the blueness of Potentia trium or cut it completely? Thanks in advance?

That is a wrap on my side guys. What are your thoughts on the season premiere? Are you fans of Kaela or didn’t she fit the Charmed-verse in your opinion? Share your thoughts in the comment section below. Till next week. . .