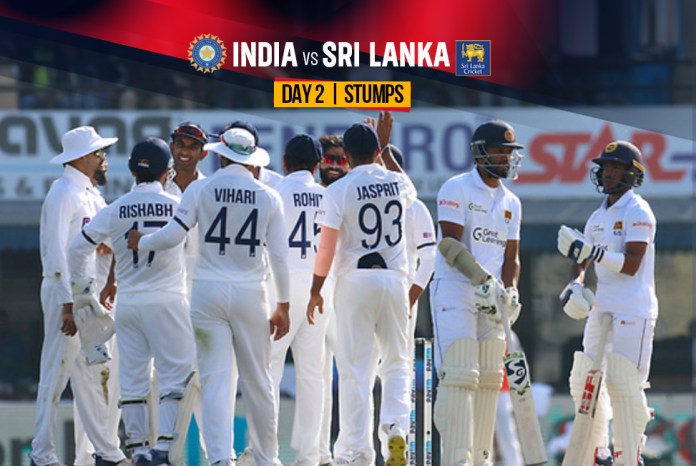 IND vs SL LIVE Day 2 Highlights – Ravindra Jadeja’s ROCKSTAR Show: The Day 2 of India vs Sri Lanka 1st test in Mohali belonged to only one man. Ravindra Jadeja scored an unbeaten 175 as India declared their first innings at 574/8 against Sri Lanka. India further got a grip on the match with four wickets as the visitors ended the day at 108/4. Follow India vs Sri Lanka 1st Test Live Updates with InsideSport.IN

After the stumps on Day 2, Sri Lanka’s score read 108/4 as they are trailing India by 466 runs. For Lankans Pathum Nissanka (26*) and Charith Asalanka (1*) are still at the crease while for hosts Jasprit Bumrah and Jadeja bagged one wicket each. Ravichandran Ashwin was the pick among the bowlers for hosts as he scalped two wickets.

Coming to bat in the third session, Sri Lanka enjoyed a firm start as they frustrated Indian bowlers thoroughly. But in the 19th over, veteran spinner Ashwin drew the first blood for India as he trapped Lahiru Thirimanne in front of wickets for LBW.

In the 25th over, Jadeja was introduced for the first time to bowl and only in his second delivery, the all-rounder dismissed the other Lankan opener Dimuth Karunaratne. Bumrah who overstepped in the 32nd over as he bowled out Pathum Nissanka was rewarded in his very next over as he trapped Angelo Mathews in front of wickets. Ashwin soon struck again to pile more pressure on the visitors. The veteran Indian bowler trapped Dhananjaya de Silva for LBW.

Earlier in the day, hosts resumed the second session at 468/7, India lost its eighth wicket quite early as Vishwa Fernando sent Jayant Yadav (2) back to the pavilion.
However, Ravindra Jadeja kept on scoring runs at a brisk pace. The left-handed batter brought up his 150 in the 123rd over of the innings.

Jadeja scored an unbeaten 175 and Rohit Sharma finally declared the innings with the score being 574/8. Sri Lanka was made to bowl 129.2 overs in the first innings.
Along with Jadeja, Mohammed Shami also remained unbeaten on 20.

A minute’s silence was observed before the start of play on Day 2 of the first Test for Rodney Marsh and Shane Warne who passed away yesterday. The Indian Cricket Team will also be wearing black armbands today.@Paytm #INDvSL pic.twitter.com/VnUzuqwArC

That’s a FIFTY for @imjadeja 👏👏

India still have three batsmen left in Jadeja, Ashwin and Jayant Yadav and getting to the 500-run mark won’t be difficult. Jadeja is batting on 45 while Ashwin scored 10 off 11 with Jayant yet to bat. Add Mohammed Shami and Bumrah’s batting skills to the mix, getting another 150-odd run looks achievable.

Even though the pitch has offered assistance to spinners, Sri Lanka were not able to grab that with both hands. Lasith Embuldeniya looked dangerous but Rishabh Pant took him to cleaners hammering 22 runs in one over. Other than him, Suranga Lakmal, Vishwa Fernando, Lahiru Kumara and Dhananjaya de Silva all bagged a wicket each but all of them were expensive and Indian batters looked comfortable going against them.

Earlier in the day captain, Rohit Sharma won the toss and decided to bat first, India started off well with openers Rohit and Agarwal, thrashing the Lankan bowlers. The duo took the hosts to the 50-run mark in just 9 overs.

The visitors finally heaved a sigh of relief when Lahiru Kumara dismissed Rohit, who was caught by Suranga Lakmal at the fine leg, leaving the team’s total at 52/1. Following the skipper’s dismissal, Vihari joined Agarwal and kept the scoreboard moving for India.

Agarwal was then sent back for 33 runs by Lasith Embuldeniya. His wicket meant Virat Kohli’s arrival, who is playing his 100th Test match.

Then, Kohli along with Vihari anchored the innings and ensured that there was no further damage.

Resuming the post-lunch session at 109/2 the duo of Virat Kohli and Hanuma Vihari carried on in a solid manner as the duo notched up a fifty partnership and Vihari also notched up his fifth Test half-century to take the team’s total to the 150-run mark.

Virat Kohli kept scoring runs at a brisk pace and became the sixth Indian batter to notch up a milestone of 8000 Test runs. The Sri Lankan bowlers struggled as they bowled a lot of front foot no balls.

The 90-run partnership between Kohli and Vihari was finally broken as Lasith Embuldeniya cleaned up Kohli for 45 to leave India at 170/3. In the space of five runs, India lost another wicket in the form of well-set Hanuma Vihari who played on to left-arm pacer Vishwa Fernando for 58 to leave India at 175/4.

Rishabh Pant and Shreyas Iyer batted sensibly from there on to ensure that there was no further damage as India scored 199/4 going into Tea scoring 90 runs in the session losing 2 wickets.

Resuming the post-tea session at 199/4 Rishabh Pant and Shreyas Iyer batted sensibly as India crosses the 200-run mark and the duo notched up a fifty partnership. Shreyas Iyer was looking good but was dismissed leg before wicket by Dhananjaya de Silva for 27 to leave India at 228/5 breaking the 53-run partnership. Pant carried on kept scoring runs at a brisk pace by hitting boundaries and went on to score his 8th Test half-century. Ravindra Jadeja who was making a comeback into the Test team after recovering from injury showed little signs of rust and gave company to Pant from the other end.

Pant-Jadeja duo notched up a fifty partnership. Wicket-keeper batter Pant became aggressive after his half-century and started taking the Lankan spinners to the cleaners hitting some big sixes against them.

Pant along with Jadeja took the team’s total beyond the 300-run mark and notched up a 100-run partnership. Rishabh Pant missed on a century as he was cleaned bowled for 96 by pacer Suranga Lakmal.

Jadeja and Ravichandran Ashwin from there on ensured that there was no further loss of wicket as India ended day-1 at 357/6. Jadeja remained unbeaten on 45 while Ashwin was unbeaten on 10.

For more sports news and updates, follow us at InsideSport.IN