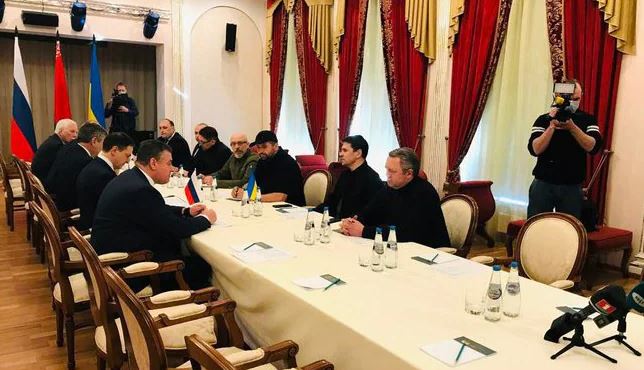 Delegates from Ukraine and Russia met for the first direct talks between the two countries on Monday since Russia launched its invasion five days earlier. The negotiations lasted many hours, and while they provided some optimism for a peaceful resolution to the conflict, Ukraine’s president and citizens of Kyiv made it apparent that they had low expectations for the meeting. There were allegations of increased Russian shelling in eastern Ukrainian cities even as the summit was taking place.

Russia has been tight-lipped about its goals for the negotiations, but CBS News’ Haley Ott reported that Ukraine’s top objectives were an immediate ceasefire and the departure of all Russian soldiers. The meeting ended early in the evening, according to Russian officials, and the respective delegations were returning to their own capitals to consider the negotiations.

Residents in Ukraine’s capital city of Kyiv were permitted out of their homes and shelters for the first time since Saturday night, when the local authority stated anyone out on the streets would be considered as an enemy, fearing an escalation of Russia’s siege on the city.

Ukrainian officials stated Russia had blasted major cities again overnight just hours before the Russian-Ukrainian talks began near the Belarusian border. Kharkiv, Ukraine’s second largest city, is under heavy artillery assault, according to defense officials, after Ukrainian forces reclaimed it from Russian troops the day before.

Meanwhile, pressure was mounting on Russian President Vladimir Putin, with the United Nations General Assembly convening an extraordinary emergency meeting to discuss the crisis a day after Putin said he was putting his nuclear forces on alert in response to NATO’s “aggressive statements” and harsh sanctions from the world’s wealthiest nations.