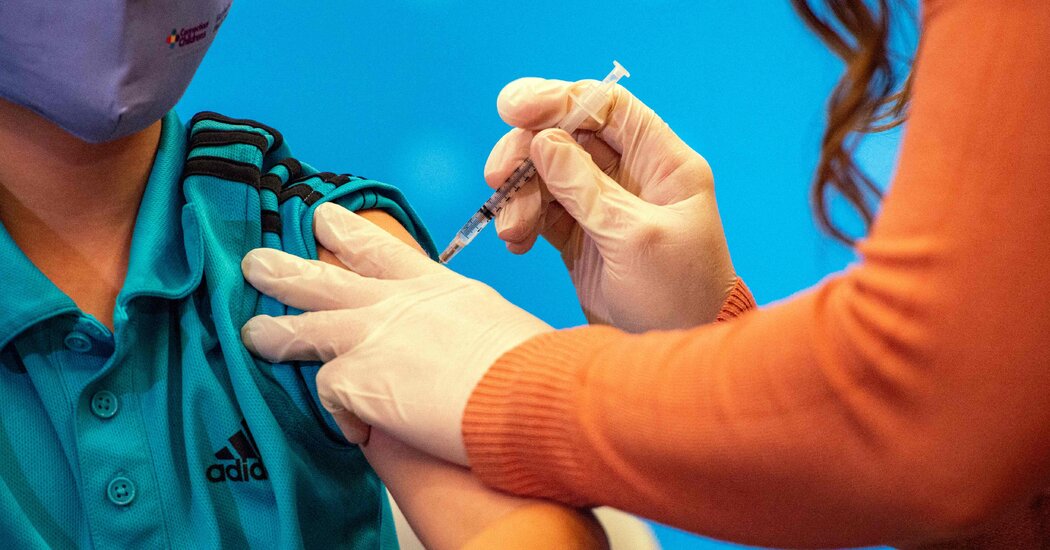 The coronavirus vaccine made by Pfizer-BioNTech is much less effective in preventing infection in children ages 5 to 11 years than in older adolescents or adults, according to a large new set of data collected by health officials in New York State — a finding that has deep ramifications for these children and their parents.

The Pfizer vaccine is the only Covid shot authorized for that age group in the United States. It still prevents severe illness in the children, but offers virtually no protection against infection, even within a month after full immunization, the data, which were collected during the Omicron surge, suggest.

The sharp drop in the vaccine’s performance in young children may stem from the fact that they receive one-third the dose given to older children and adults, researchers and federal officials who have reviewed the data said.

The findings, which were posted online on Monday, come on the heels of clinical trial results indicating that the vaccine fared poorly in children aged 2 to 4 years, who received an even smaller dose.

Experts worried that the news would further dissuade hesitant parents from immunizing their children. Other studies have shown the vaccine was not powerfully protective against infection with the Omicron variant in adults, either.

“It’s disappointing, but not entirely surprising, given this is a vaccine developed in response to an earlier variant,” said Eli Rosenberg, deputy director for science at the New York State Department of Health, who led the study. “It looks very distressing to see this rapid decline, but it’s again all against Omicron.”

Still, he and other public health experts said they recommend the shot for children given the protection against severe disease shown even in the new data set.

“We need to make sure we emphasize the doughnut and not the hole,” said Dr. Kathryn M. Edwards, a pediatric vaccine expert at Vanderbilt University.

The numbers for protection from infection are more reliable. Vaccine effectiveness against infection in the older children decreased to 51 percent from 66 percent. But in the younger children, it dropped sharply to just 12 percent from 68 percent.

The numbers change drastically between ages 11 and 12. During the week ending Jan. 30, the vaccine’s effectiveness against infection was 67 percent in 12-year-olds but just 11 percent in 11-year-old children.

“The difference between the two age groups is striking,” said Florian Krammer, an immunologist at the Icahn School of Medicine at Mount Sinai.

The biological difference between the two ages is likely to be minimal, but while 12-year-old children got 30 micrograms of the vaccine — the same dose given to adults — children who were 11 received only 10 micrograms, he noted.

“This is super interesting because it would almost suggest that it’s the dose that makes the difference,” he added. “The question is how to fix that.”

There have been at least 851 deaths involving Covid-19 in children under 17, and nearly 7,000 cases of multisystem inflammatory syndrome in children, a rare but serious condition associated with Covid. More children were hospitalized during the Omicron surge than at any other point in the pandemic.

The findings underscore the need to gather more information on the best dose, number and timing for the shots given to children, Dr. Rosenberg said. They also underscore vaccines as just one measure of protection from the virus, along with masks and social distancing, he said.

Dr. Rosenberg’s research was posted just days after the Centers for Disease Control and Prevention released new recommendations that would allow the majority of Americans to stop wearing masks, including in schools.

The new data also raises important questions about the Biden administration’s strategy for vaccinating children. Only about one in four children aged 5 to 11 years has received two doses of the vaccine. (The C.D.C. has not yet recommended booster doses for this age group.)

The vaccine has not yet been authorized for children younger than 5. Scientific advisers to the Food and Drug Administration were scheduled to meet on Feb. 15 to evaluate two doses of the vaccine for the youngest children, while three doses were still being tested. But the meeting was postponed after Pfizer submitted additional data suggesting two doses were not strongly protective against the Omicron variant of the virus.

Dr. Rosenberg briefed top C.D.C. officials, including Dr. Rochelle P. Walensky, the agency’s director, with findings in early February. F.D.A. leaders learned of the data around the same time. Some federal scientists pushed for the data to be made public ahead of the F.D.A. expert meeting scheduled for Feb. 15, viewing it as highly relevant to the discussion about dosing in children under 5, federal officials and others familiar with their responses to it said.

The data is generally consistent with a report from Britain showing that vaccine effectiveness against symptomatic infection in adolescents aged 12 to 17 years drops to 23 percent after two months. The C.D.C. has been compiling its own data on the vaccine’s effectiveness in younger children and is expected to release at least some of it as early as this week, according to people familiar with the agency’s plans.

Israeli researchers have also been assessing the vaccine’s performance in young children since the country made it available to them in November.

“We continue to study and assess real-world data from the vaccine,” Amy Rose, a spokeswoman for Pfizer, said in response to queries about the new data.

Dr. Philip Krause, who recently retired from the F.D.A. as a senior vaccine regulator, said assumptions about certain antibody levels being predictive of vaccine effectiveness should be re-evaluated in light of the new results.

“It certainly weakens the argument for mandating that people get that lower dose,” he said.

It is not unusual for experts to revisit the dosing and interval for pediatric vaccines as more evidence becomes available. But in this case, giving the children a higher dose to kick up the immune response may not be an option because some data suggest that it may cause too many fevers, an unwelcome and potentially dangerous side effect in young children.

There are other alternatives that may improve immunity in young children, said Deepta Bhattacharya, an immunologist at the University of Arizona.

Pfizer and BioNTech are testing a third dose in children under 5, as well as in those aged 5 to 11, with the idea that, as in adults, an extra shot may significantly augment immunity. Results from these trials are expected in several weeks. Studies in adults suggest that three doses of the vaccine were more protective against the Omicron variant than two doses.

Dr. Bhattacharya said he and his wife spaced the two doses for their children, who are 8 and 10, by eight weeks rather than the currently recommended three, based on studies suggesting that a longer gap between doses may improve protection. The C.D.C. last week encouraged some people older than 12, especially boys and men between 12 to 39 years, to wait eight weeks between the first and second shot.

Another option may be a version of the vaccine designed to thwart the Omicron variant, or one that has a mix of several variants. Pfizer-BioNTech, Moderna and Johnson and Johnson are all testing Omicron-specific versions of their vaccines.

The next variant may differ widely from Omicron, much as Omicron did from the Delta variant. But training the body to recognize multiple versions would still offer a better chance at preventing infection with newer forms of the virus. “Deciding when and how best to update these vaccines, I think that’s really still the key conversation going forward here,” Dr. Bhattacharya said.

Newer vaccines that use different approaches than the ones currently authorized in the United States may also work better for children. A protein-based vaccine made by Novavax is under review at the F.D.A., and the pharmaceutical companies Sanofi and GSK said this month that they plan to submit their vaccine for evaluation soon.

Many parents want to vaccinate their children to prevent them from spreading the virus to vulnerable relatives, to keep them in school or to avoid the possibility of long Covid, the poorly understood set of lingering symptoms that can occur even after a mild infection. Experts acknowledged that the vaccine’s low effectiveness against infection does not ease those concerns.

“They may also make it so that your kid who brings home Covid isn’t shedding virus as much as they would be if they weren’t vaccinated, and they also may have it for a shorter amount of time,” she said.

The virus is here to stay, and children’s risk of severe outcomes increases with age. So inoculating children early is a good idea, said Paul Offit, director of the Vaccine Education Center at Children’s Hospital of Philadelphia and an adviser to the F.D.A.

“The argument I make to parents when I talk to them about this vaccine is, your children are going to grow up,” he said. “They’re going to need to be protected against this virus for years.”