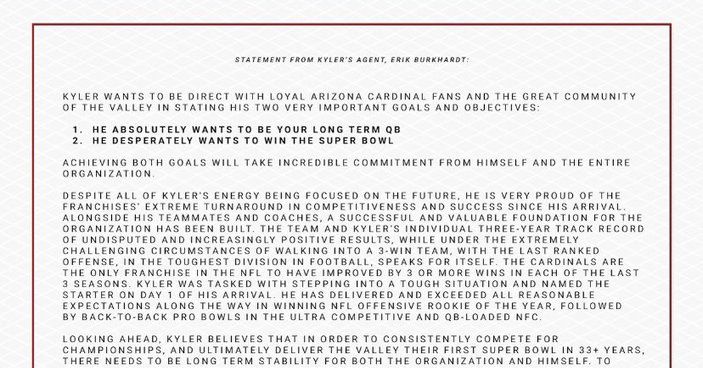 One of the most surprising and bizarre storylines this offseason is the status of Cardinals QB Kyler Murray. It’s a story fraught with rumor, denial, and drama — culminating Monday with a literal wall of text sent from Murray, via his agents to ESPN’s Adam Schefter.

That’s a whole lot to say for an incumbent QB who is seemingly in a good position with his team, and it’s for this reason this is all so bizarre. Rumors of Murray’s unhappiness with the Cardinals began shortly before the Super Bowl, when the QB unfollowed the Cardinals on Instagram, and scrubbed all mention of the team from his personal account.

It’s weird, but that’s all it takes to spark major rumors — and you’ve got to admit, it is weird for an athlete to go through the effort to unfollow a team and delete photos, especially if nothing’s up. Murray’s desires here make a lot of sense, but this is also a calculated play. The QB wants a long term deal now, following a season that started with MVP talk, to maximize his earning potential and lock in a high figure. As it stands Murray has one year left on his four-year rookie deal, and would like that locked up before playing this season.

Is Murray right in pulling this move? Well, yes. You might think the method has been wrong, but pushing the Cardinals to improve is a necessity. Arizona legitimately looked like it had a chance at making the Super Bowl before a collapse caused by injuries to key players like DeAndre Hopkins, and to a lesser extent J.J. Watt. This is a franchise that has had a tendency to drag its feet on improving and striking while the iron is hot, so Murray is using his power as a player to push the Cardinals, and secure his bag at the same time.

Ultimately this should be comforting to Cardinals fans. Murray isn’t wanting out, he’s not demanding a trade — he just wants to see commitment from the organization to him, and the rest of the team. Is it self-serving? Sure, but it’s also serving the goal of winning football games. Now the ball is in Arizona’s court.