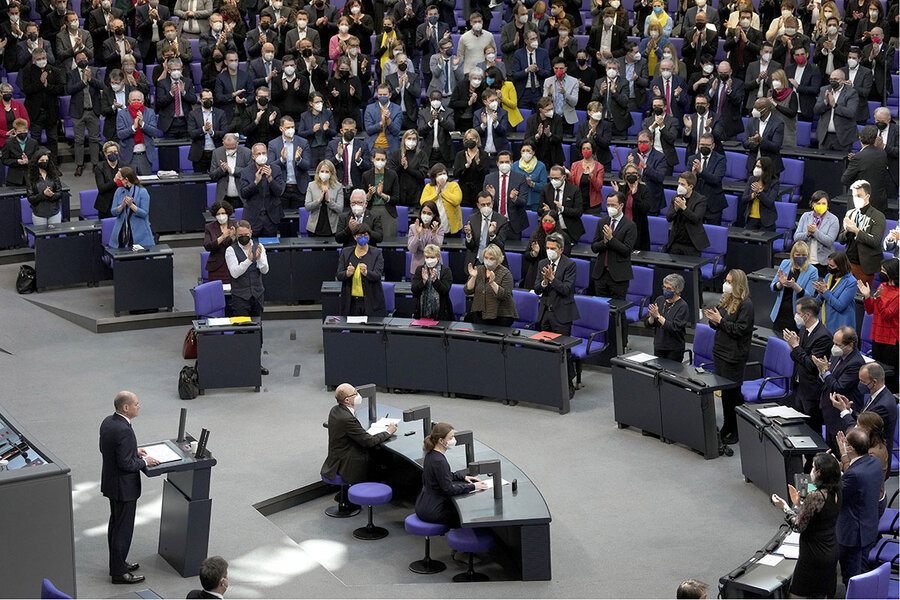 As Europe’s largest economy, Germany plays an outsize role in European affairs, including the strategic direction of the European Union. Before Russia’s invasion of Ukraine, that usually meant a conciliatory voice in the debate over political relations with Russia, which is a major energy supplier to Europe.

Now Germany has taken a sharp turn against Russia, supporting sanctions on Moscow and sending weapons to Ukraine, while vowing to diversify its energy imports and reequip its military. This marks a sea change in German policy that reflects a wider European revulsion at Russian President Vladimir Putin’s military actions.

Germany’s conciliatory stance toward Russia was a major lever for Vladimir Putin in Europe. Its decision to ship weapons to Ukraine signals a fundamental shift in Europe’s perceptions of Russia as a security threat.

Making a pivot from dependence on Russian oil and gas will be challenging, not just for Germany but for many countries in the 27-member European Union. High gas prices have already put a squeeze on poorer countries. But the cancellation of a major pipeline has served notice that Europeans have awakened to Russia as a security threat.

In a speech on Sunday to parliament, Chancellor Olaf Scholz cast the challenge for Europe as a collective one. Germans and all EU members must ask, he said, “not simply what they can extract [from the EU] for their own country. But asking: What is the best decision for our Union? Europe is our framework for action.”

That mantra has long encapsulated a historically complex relationship between neighbors that offered mutual benefits, particularly in energy trading, and held out the prospect of deeper economic and political ties.

No more. After Russian President Vladimir Putin launched a full-scale attack on Ukraine, then put his nuclear forces on alert, the calculus in Europe changed irreparably. And Germany, among the most reluctant to break with Russia, has ditched the mantra. What began with a token donation of 5,000 helmets to Ukraine had by Sunday transformed into a full-throated declaration that Germany must re-arm, firmly sanction Putin’s government, pivot from Russian energy imports, and prepare to act within a united Europe.

Germany’s conciliatory stance toward Russia was a major lever for Vladimir Putin in Europe. Its decision to ship weapons to Ukraine signals a fundamental shift in Europe’s perceptions of Russia as a security threat.

“The 24th
of February, 2022, marked a turning-point in the history of our continent,” German Chancellor Olaf Scholz told a special address at the Bundestag, referencing the day Russian troops rolled into Ukraine. “We are in a new age … In attacking Ukraine, Putin doesn’t just want to eradicate a country from the world map, he is destroying the European security structure we have had in place since Helsinki.”

Will all of Europe be ready for this sudden, almost overnight shift, and what political and economic decisions still lie ahead?

In his speech, Mr. Scholz said Germans and all EU members must ask, “not simply what they can extract [from the EU] for their own country. But asking: What is the best decision for our Union? Europe is our framework for action.”

Germany is the richest country in Europe and has long been seen as a commanding voice in the 27-member European Union, though it also takes pains to frame itself as a team player.

“The wool [is off] Germany’s eyes, says Kristine Berzina, head of the geopolitics team at The German Marshall Fund, a Washington-based think tank. “This conflict has made things real around Russia.”

She adds: “There has always been a sense of ‘Oh, they would never … they would never actually do the crazy things that people in eastern Europe think are possible.’“ Germany is now willing to pay a financial cost and revise its long-held Ostpolitik. That policy, which dates to Soviet times and the division of Germany, called for recognizing and expanding ties with then-East Germany and Soviet-bloc countries.
Germany has now woken up, she says, “in order to stand with Europe and potentially lead Europe right now.’ That is monumental.”

People walk down the bulevard ‘Strasse des 17. Juni’ ahead of a rally against Russia’s invasion of Ukraine in Berlin, Germany, Sunday, Feb. 27, 2022.

Mr. Scholz’s speech called on all EU members to work for the greater good, rather than their individual country. Across Europe, hundreds of thousands appeared ready to meet this challenge, as they rallied from Rome to Berlin to Prague, waving signs saying “No War in Ukraine” and “Stop Putin.”

Only in office since December, Mr. Scholz signaled a 180-degree turn for Germany, a NATO member that has a longstanding policy of not supplying weapons to conflict zones. Now it’s agreed to send 1,000 anti-tank weapons and 500 surface-to-air missiles to Ukraine for its defense against Russian invaders.

“For the first time ever, the European Union will finance the purchase and delivery of weapons and other equipment to a country that is under attack,” European Commission President Ursula von der Leyen said in a statement Sunday. “This is a watershed moment.”

Germany is budgeting an emergency €100 billion for military readiness, and says it will spend more than 2% of GDP per year on defense spending, meeting a NATO goal that has been a source of friction with U.S. presidents past and present. It’s had a military that’s “running on spare parts,” says Andreas Goldthau, a political scientist at the University of Erfurt.

German relies heavily on Russian oil and gas to power its cities and factories, and it will take time to lessen its dependence. For now, it is scrapping the Russo-German pipeline Nord Stream 2, the second of twin pipelines that would have together raised annual import capacity into Europe of 55 billion cubic meters. Germany plans to build a strategic natural gas reserve, and add two LNG terminals to diversify its fuel supplies.

After hedging all week, Germany finally joined the call to ban Russian banks from the international SWIFT system, and the EU has also banned Russian aircraft from EU airspace.

Analysts say this marks a sea change in German leadership after 16 years under Angela Merkel, who was often criticized for being reactive to crises rather than proactive to meet future challenges, reflecting the gravity of the security threat to Europe.

Yet calls for a united European front against Russia face immediate hurdles. For one, high energy prices as a result of restrictions on Russian trade will test less-wealthy European countries whose citizens are already grappling with higher heating bills.

The U.S. has long questioned the risk to Europe of relying on Russia for roughly 40% of natural gas and a quarter of oil consumption. In European policy circles, though, energy was discussed as a security issue in only very broad terms, says Dr. Goldthau, the political scientist.

But Europe cannot wean itself off Russian energy overnight. Europe has long plotted a transition to green energy, but plans to be carbon neutral were to occur by 2050, with Russian gas as a transition fuel.

Indeed, energy is an area where European unity could quickly fall apart. Roughly 65% of Germany’s energy imports are comprised of Russian gas, with Poland at 55%, and Italy at 43%. A dozen or so other countries are even more dependent.

“Alternatives [to Russian natural gas] are expensive and kind of complicated, and maybe we don’t have a full picture of how we get there,” says Ms. Berzina, of the German Marshall Fund.

Mr. Putin and his officials know this, of course. After Germany’s announcement to suspend Nord Stream 2, a Putin deputy tweeted “Welcome to the brave new world where Europeans are very soon going to pay €2,000 for 1,000 cubic meters of natural gas.”

Energy prices have already spiked in Europe, as there are no alternatives “in any quantity that resembles what Europe gets from Russia,” says Evie Zambetakis, director of the Eastern Mediterranean Studies Initiative at the University of Nicosia. “Some countries will be hit harder than others.”

Still, energy trade dependence cuts both ways, says Marcus Dirsus, energy security policy fellow at the University of Kiel. Russia’s economy is built on the receipts from energy exports. “And energy is a card that Russia can play only once,” says Dr. Dirsus, noting that countries counted on stable Russian supplies throughout the Cold War.

“If that backfires, it will only accelerate diversification away from Russian energy supplies.”