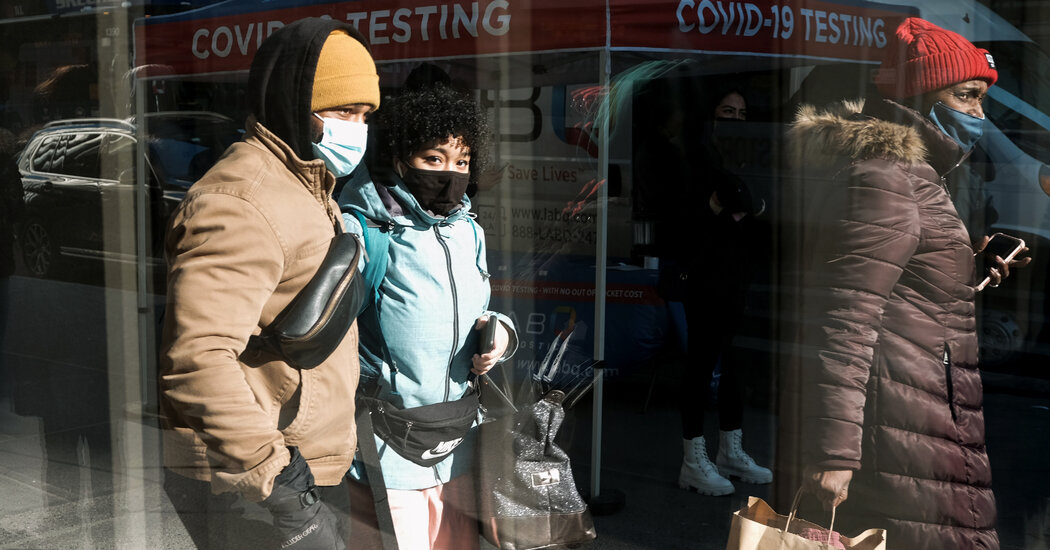 More than half of people who took a rapid antigen test five to nine days after first testing positive for the coronavirus or after developing Covid-19 symptoms tested positive on the antigen test, according to a new study from the Centers for Disease Control and Prevention.

The finding raises more concerns about the agency’s revised isolation guidelines, which say that many people with Covid can end their isolation periods after five days, without a negative coronavirus test.

A C.D.C. scientist who was an author of the study said that he did not believe the agency’s isolation guidelines needed to change. But the results suggest that many people with the virus may still be infectious during this period, scientists said.

The study “demonstrates what a lot of people have suspected: that five days is insufficient for a substantial number of people,” Angela Rasmussen, a virologist at the Vaccine and Infectious Disease Organization at the University of Saskatchewan, said in an email. “The bottom line,” she added, “is that this absolutely should lead to a change in isolation guidance.”

The research was conducted after Omicron became the dominant variant in the United States and as cases were surging nationwide. Cases have since fallen precipitously, reducing the risk of infection and the number of Americans who are in isolation.

The C.D.C. shortened the isolation period to five days from 10 in December as the Omicron variant spread. Many public health experts criticized the move, noting that people might still be infectious after five days and that allowing them to end isolation without testing might help the new variant spread faster.

Dr. Ian Plumb, a medical epidemiologist at the C.D.C. and an author of the new study, said that he believed the study “basically supported” the agency’s current isolation guidance, which asks people to continue taking precautions — including wearing masks and refraining from travel — until 10 full days have passed.

“I honestly don’t think that it means that the current guidance needs to” change, he said.

Instead, he said, the study supports the idea that antigen tests can be successfully integrated into isolation guidelines.

“I think the biggest takeaway is that it’s possible to incorporate antigen tests into the guidance for isolation because they provide additional information about someone’s risk of being potentially infectious,” he said.

The new study was based on people whose coronavirus infections were reported to the Yukon-Kuskokwim Health Corporation, which provides health care for rural communities in southwestern Alaska, from Jan. 1 to Feb. 9.

In early January, Yukon-Kuskokwim issued new isolation guidelines. It recommends that people isolate for 10 full days after testing positive for or developing symptoms of the virus. However, people who had no symptoms or resolving symptoms, and had not had fevers for at least 24 hours, on Days 5 through 9 of their isolation periods were eligible for free Abbott BinaxNOW rapid antigen tests, administered by Yukon-Kuskokwim staff members. If they tested negative, they could end their isolation periods early.

People who had symptomatic infections were more likely to test positive on Days 5 through 9 than those who had been asymptomatic, the researchers found. People who had received a primary vaccine series — two doses of an mRNA vaccine or a single dose of Johnson & Johnson’s shot — or had been previously infected by the virus were less likely to receive positive antigen results during this time frame than those who had not been vaccinated or previously infected.

“Ultimately, I don’t think this is surprising based off the data we’re seeing and the general concern from the infectious disease community on shortening isolation in the face of a novel variant,” said Saskia Popescu, an infectious disease epidemiologist at George Mason University. “But I do think it’s important we continue to assess this, as antigen tests aren’t a perfect proxy for infectiousness and ability to transmit the virus.”

The findings are consistent with several other recent studies, which have not yet been published in scientific journals or reviewed by outside experts. In one, researchers found that more than 40 percent of vaccinated health care workers tested positive on rapid antigen tests on Days 5 through 10 of their illnesses.

In two other studies, researchers found that a substantial proportion of people with suspected and confirmed Omicron infections still had high viral loads more than five days after first testing positive for the virus.