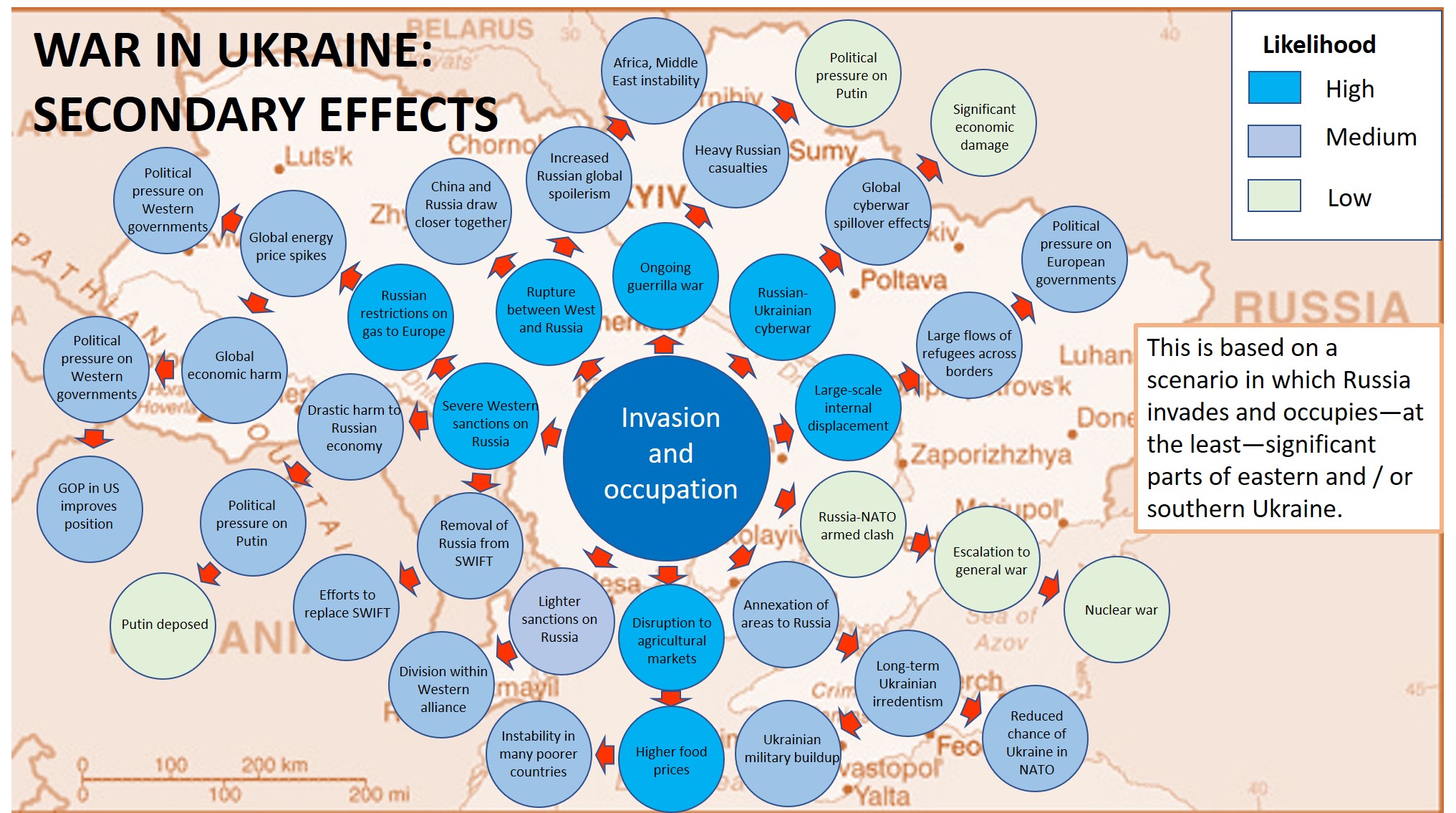 As the Russian invasion of Ukraine continues, many wonder how it might conclude.  Will Putin conquer the whole nation, or move on to new targets? How will the western sanction strategy impact Russia?

This may be where simulations and scenarios become useful. A scenario is small story about a potential future.  Typically we build them based on one or two driving forces, and often produce several together for comparative purposes.  A simulation, in contrast, is either a human or computer representation of a situation, where people (or software) make decisions to drive that situation to an end state.   A simulation may resemble a game, or be one, as with wargames or business simulations.  A scenario is ant object to think through, while a simulation gives users ways to intervene in the problem.

I find scenarios help us think about futures usefully. As stories they are very accessible, allowing us to imagine ourselves in them. Multiple scenarios give us ways to see divergent possibilities.  Simulations perform a similar function, as a given run-through constitutes a narrative. Simulations can also shed light on difficult and emergent decisions, as well as surprising us as the future often can.

People have been creating scenarios and simulations of the Russo-Ukrainian conflict since it began in 2014, as well as some predating that time.  Indeed, it looks like the Biden administration took both simulations and scenarios seriously in their planning. I’ll share some here in the hope they give us some ways of thinking about where the crisis may be headed.  Since current events gradually render these alternate histories, they may also serve as interesting historical notes.

Josh Calder shared this infographic with me, developing a sequence of events for three different ways forward: diplomacy, irregular war, and a conventional attack.

The Russian-led Valdai Club published an invasion story which looks pretty close to reality so far.   Interestingly, the article breaks down pros and cons, concluding that such an invasion should be unlikely to occur.

Assuming war, other scenarios appear.  A Foreign Affairs article offers a range of outcomes following Russian success in Ukraine.  Josh Calder created another infographic, this time of what might result from the war. Note the chained sequences of effects, along with rating them for relative likelihood of occurring:

A Bloomberg column considers three scenarios for how western economic sanctions could impact Russia and the world.  Zoe Schneeweiss helpfully turned them into a single infographic:

The preceding scenarios depict futures as narratives.  Simulations place people or bots in decision-making roles, in the middle of scenarios, if you will, and show us branching possibilities.  As artifacts, they can appear in the form of playable materials (i.e., games) or as descriptions of a simulation being run.

Beyond Ukraine, how might the war expand to other nations, such as those to Russia’s east?  Famous and foundational think tank RAND gamed a Russian attack on the Baltic nations.  This elicited at least one critique.

Bandera is a matrix game, which is a kind of blend of tabletop and role-playing games.  Players take up the roles of Russia, the Ukrainian government, Ukrainian Separatists, the USA, and the European Union.   It’s freely available to download and play.

Futurist Stephen Aguilar-Milan ran two matrix game simulations with very different outcomes.  In one a Russian invasion of Ukraine develops into war with NATO, and Moscow’s forces are ultimately defeated.  In another Russia successfully occupies Ukraine and the Baltic states, dealing NATO a major defeat.

Next War: Poland simulates a Russian invasion of that nation.

In terms of computer wargames, Operational Art of War IV apparently has some levels displaying Russian and Ukrainian armies at war. I think this is at the small unit scale, but haven’t played it.

What do you make of these?  Are there other scenarios or simulations for this topic which you recommend?

(thanks to Brian Tain for this post and for answering my question, as well as to Lennaert van Mierlo and the Association of Professional Futurists, especially Josh Calder and Stephen Aguilar-Milan. Several scenarios via the excellent Naked Capitalism blog.  Next War: Poland photo by Jakub Kircun)