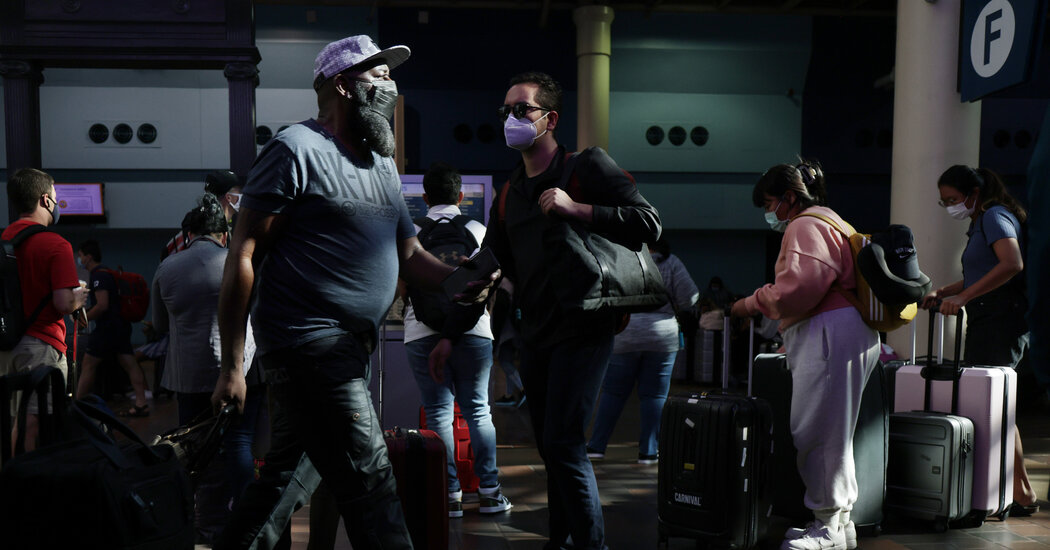 The Centers for Disease Control and Prevention on Friday offered a new strategy to help communities across the country live with the coronavirus and get back to some version of normal life.

The new guidelines suggest that 70 percent of Americans can now stop wearing masks, and no longer need to social distance or avoid crowded indoor spaces.

The recommendations no longer rely only on the number of cases in a community to determine the need for restrictions such as mask wearing. Instead, they direct counties to consider three measures to assess risk of the virus: new Covid-related hospital admissions over the previous week and the percentage of hospital beds occupied by Covid patients, as well as new coronavirus cases per 100,000 people over the previous week.

Based on these three factors, counties can calculate whether the risk to their residents is low, medium or high, according to the agency, and only areas of high risk should require everyone to wear a mask. But unvaccinated people should wear masks even in low-risk areas, the agency said.

The new guidelines are being released as the coronavirus is in retreat across the country. Case numbers have dropped to levels not seen before the surge of the Omicron variant, and hospitalizations have been plummeting. About 58,000 people are hospitalized with Covid nationwide, but those numbers have fallen by about 44 percent in the past two weeks.

Several experts said the new guidelines were appropriate for the country’s current situation. Although the number of cases nationwide is still high, “we’re well past the surge,” said Linsey Marr, an aerosol scientist at Virginia Tech. “We don’t need to be operating in emergency mode anymore.”

But many places have already shed pandemic restrictions. Most states have eased rules for mask-wearing, and some, like New Jersey, have announced plans to lift mandates even in schools. Others are poised to end indoor mask mandates in the coming weeks. An official recommendation from the C.D.C. may hold some sway in districts that have been more cautious.

Under the C.D.C.’s previous criteria, 95 percent of the counties in the United States were considered high risk. Using the new criteria, fewer than 30 percent of Americans are living in areas with a high level of risk, the agency said.

“We want to give people a break from things like masking when our levels are low, and then have the ability to reach for them again should things get worse in the future,” she said. “We need to be prepared and we need to be ready for whatever comes next.”

Those who are particularly vulnerable because of their age, health status or occupation may choose to take extra precautions, regardless of the risk level in their community, she added.

The availability of high-quality masks such as N95 respirators allows individuals at high risk to continue to protect themselves even if others around them are not taking precautions, Dr. Marr said.

She added that it was good that the agency would continue to monitor cases because hospital rates can lag by two to three weeks. “By the time hospitals are overwhelmed, it’s too late,” she said.

But Dr. Walensky said C.D.C. scientists tested models with data from previous surges to confirm that the new method of calculating risk would have detected the surges early.

The Omicron surge made it clear that because so many Americans have some immunity to the virus through vaccinations or prior infection, counties may see high numbers of cases and yet comparatively few that involve serious illness. The new guidelines nod to that reality, and allow for a more sustainable approach to living with the virus, public health experts said.

“It just looked wrong that the whole country was a single shade of red,” said Jennifer Nuzzo, an epidemiologist at Johns Hopkins University’s Bloomberg School of Public Health.

Though a growing number of political leaders, public health experts and ordinary citizens now support the easing of restrictions, at least temporarily, others are still wary. They note that millions of people in the United States — including children under 5 — and billions around the world remain unvaccinated, making the emergence of a dangerous new variant not just possible but likely.

A new C.D.C. framework. The Centers for Disease Control and Prevention released new guidelines that will help counties determine when and where people should wear masks, practice social distancing and avoid crowded indoor spaces.

The C.D.C. and the Biden administration have declared victory prematurely before, including last spring when they told vaccinated Americans they could go mask-free and celebrate a “summer of freedom,” only to see the Delta variant send hospitalizations and deaths soaring again.

The White House has been working on a pandemic exit strategy that would help Americans live with the virus. But Dr. Walensky said just two weeks ago that it was not yet time to lift mask mandates. And some officials in the C.D.C. and the Department of Health and Human Services are nervous about the changing guidance, according to an administration official who spoke on condition of anonymity.

Some public health experts also balked at the easing of restrictions, noting that the country is recording roughly 1,900 Covid-related deaths every day, children under 5 still do not have vaccines available to them and significant numbers of Americans remain at high risk because of their age, health status or occupation.

The agency’s new guidelines do not address whether and for how long people who test positive for the virus should isolate themselves, noted Dr. Robby Sikka, who chairs the Covid-19 Sports and Society Working Group, an organization that oversees safety for professional sports teams.

A study published by the C.D.C. on Friday suggested that about half of those who tested positive remained contagious after five days — the length of isolation that the agency currently recommends. “If people isolate for five days, or even worse, we just let people go, it’s possible that we have the potential to see cases rise,” Dr. Sikka said.

Even people who do not become seriously ill may suffer long-term consequences from an infection, noted Zoë McLaren, a health policy expert at the University of Maryland, Baltimore County. “We are making pandemic policy under the assumption that the mass infection that occurred during the Omicron wave has few to no health consequences in the population, but there is growing evidence that Covid infection often has persistent health effects,” she said.

In an open letter to elected officials, a group of 400 experts in public health and education opposed the push to lift indoor mask mandates, saying it was “premature and threatens to place children, their school communities, and their families at greater risk for illness, disability, and death.”

“The challenge right now is that we need to consider, certainly, hospital capacity, but we also need to be considering vaccination uptake among children, among adults,” said Sonali Rajan, an expert in school health programs at Columbia University and one of the authors of the letter.

Ideally, the C.D.C. would continue to refine its models for assessing risk in communities, including incorporating signals from wastewater analysis and other approaches, said Joseph Allen, an expert on buildings quality at the Harvard T.H. Chan School of Public Health.

“One thing is clear, there is no bright line cutoff for any of these metrics,” Dr. Allen said. “I hope C.D.C. avoids that pitfall again.”