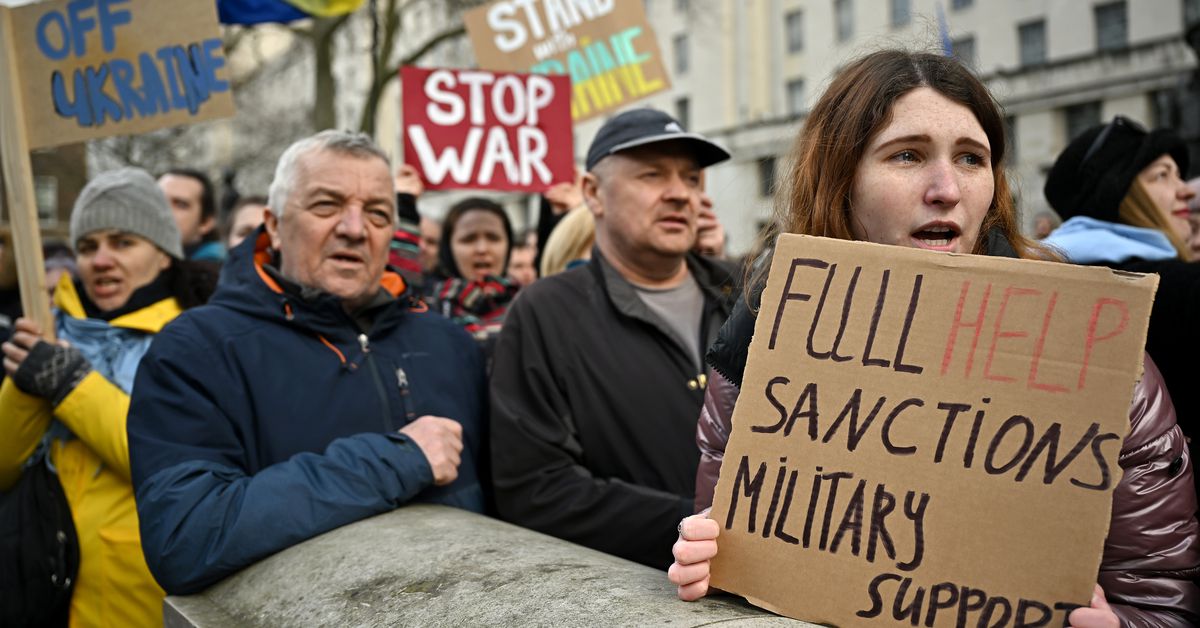 The United States and its allies have begun imposing sweeping sanctions on Russia for its invasion into Ukraine. They are the toughest economic penalties ever introduced on a country of Russia’s size. But Russia’s ruthless attack continues.

“Putin is the aggressor,” Biden said Thursday. “Putin chose this war. And now he and his country will bear the consequences.”

These are the “massive” penalties the West had been warning Putin would happen if Russia invaded — and the main tool of punishment available once the United States and its allies ruled out direct military intervention with another nuclear power. These sanctions, joined with penalties from the United Kingdom and Europe, are intended to impose extreme economic costs on Russia and its people. The ramifications of such moves will amount to economic warfare that will play out over many months, if not years, even as a hot war plays out in Ukraine.

“The Biden administration is bringing down the hammer on Russia’s financial sector. It’s also imposing an array of penalties on state-owned enterprises across the Russian economy,” said Eddie Fishman, a sanctions expert at Columbia University and former top sanctions official in the Obama administration.

“No sanctions can be proportional to Putin’s unprovoked invasion of Ukraine,” he added. “But these sanctions will make the costs palpable.”

This sanctions package stops short of adding some other dramatic options, including some that Ukraine and others had been pushing for. That includes things like sanctioning Vladimir Putin himself; cutting Russia off from SWIFT, the electronic messaging service that allows entities to communicate about global financial transactions; and targeting Russia’s energy sector.

Penalties on oil and gas, for example, would impose severe costs for Russia. But the harder it hurts Russia, the harder it hurts the West — particularly European allies, who are more reliant on Russian natural gas. But this affects the US, too. Inflation and fears of even greater global energy price spikes — already happening in the wake of Russia’s assault — and the possible domestic fallout are all intertwined with one of the most consequential foreign policy decisions in decades.

“This is going to impose severe costs on the Russian economy, both immediately and over time,” Biden said. “We have purposefully designed these sanctions to maximize a long-term impact on Russia and to minimize the impact on the United States and our allies.”

Biden also said the US is working with NATO allies to shore up its defenses, and the Pentagon announced a plan to send 7,000 more troops to Europe. Though the US was staying out of Ukraine, it “will defend every inch of NATO territory with the full force of American power,” Biden said.

At the same time, he reiterated that while the US provided millions in defense assistance to Ukraine this year, US forces would not engage directly with the conflict in Ukraine. The consequences that the US and its allies chose are targeted to hurt Russia — but avoid the kind of military entanglement with profound and unpredictable global fallout.

Biden said Thursday that the US and its allies are “in full and total agreement” in its response to Russia. In addition to the US actions, the United Kingdom has imposed its toughest sanctions ever on Russia, which include asset freezes on some of Russia’s largest banks and target more than 100 individuals. Canada targeted more than 60 individuals, and has canceled export permits. The European Union’s foreign policy chief said the bloc would impose “the harshest package of sanctions we have ever implemented,” including freezing assets, targeting certain sectors, and imposing export controls.

These sanctions build on others introduced earlier in the week, which included financial sanctions, asset freezes and travel bans for oligarchs, and the end to the certification (and the US’s sanctioning) of the Nord Stream 2 pipeline.

As tough as this sanctions package is, it reflects a circumspection that many experts and observers predicted ahead of Russia’s invasion. It does not include some of the most intense options, like an energy blockade or cutting Russia off from SWIFT. Ukraine and some European countries have pushed hard for that step in the wake of Russia’s invasion, though reportedly Germany, Italy, and some other EU countries are blocking it.

Still, experts said that the US’s decision to cut off Russia’s major financial institutions — including Sberbank and VTB — makes the need for removing Russia from SWIFT less urgent. “If you include the major banks, that means those banks cannot do business with the major financial institutions in the West,” said Jeffrey Schott, a senior fellow at the Peterson Institute for International Economics. “It doesn’t really matter whether they have access to SWIFT or not, because the major damage is done.” However, some have noted the carve outs for energy and commodity transactions in these financial sanctions which blunt some of the sting for Russia, but also for Europe.

Overall, these penalties do not rise to the level that was imposed on Iran during then-President Donald Trump’s “maximum pressure” campaign, they are extraordinary considering Russia’s much larger role in the global economy. Penalties on Russia’s largest banks will slam the economy. “This is going to mean higher interest rates and less access to capital throughout Russia. It is going to depress economic activity in Russia,” said Schott said. In other words, this will trickle down and mean real pain for ordinary Russians, who had no say at all in Putin’s decisions.

The list of oligarchs and elites being targeted is quite long, though Putin will probably try to take care of oligarchs targeted by Western sanctions. Biden’s announcement of export controls will deny Russia access to critical technologies, especially in sectors like defense. Partners in Asia had also indicated earlier this week that they will participate in export controls on technologies like semiconductors, which will squeeze Russia.

It’s unclear how this strategy will play out in the coming weeks, especially if the Ukraine conflict becomes as bloody and chaotic as some fear. Russia may well attempt to retaliate against the West for these sanctions, which could lead to economic countermeasures or hybrid warfare tactics like cyberattacks or disinformation campaigns, potentially opening up another front in this conflict.

This sanctions package goes far, but there are still questions about how tough they will be in practice. Ukraine has already demanded more pressure, including cutting off Russia’s oil and gas, and its full removal from SWIFT. And even if these penalties are damaging to Russia, they are unlikely to be enough to stop Putin from carrying out this single-minded campaign against Ukraine right now.

Will you support Vox’s explanatory journalism?

An informed electorate is essential to a functioning democracy. Vox aims to provide clear, concise information that helps people understand the the issues and policy that affects their lives — and it’s never been more vital than today. But our distinctive explanatory journalism is expensive. Support from our readers helps us keep our work free for everyone. If you have already made a financial contribution to Vox, thank you. If not, please consider making a contribution today from as little as $3.