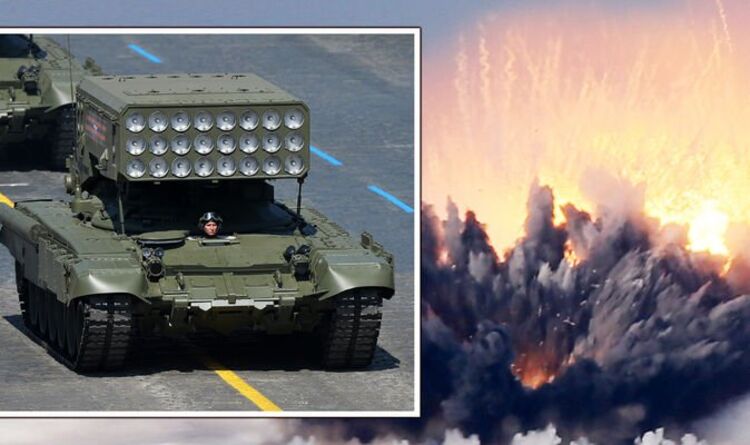 High-power thermobaric weapons, also known as vacuum bombs, are a form of high-powered explosive that uses the atmosphere itself in the explosion. They are one of the most powerful non-nuclear weapons available. According to the Journal of Military and Veterans’ Health, Thermobaric weapons “produce more heat and overpressure than conventional explosives by exploding a vapour in the blast zone.”

It adds: “Their medical effect is principally primary blast and they affect organs where there is a tissue interface of varying densities, such as the lungs, bowel and inner ear.

“Damage manifests itself in the severity and onset of occurrence, depending on distance from the blast and orientation of the victim, and can be diagnosed by simple investigative techniques.”

In 2017, a thermobaric bomb was dropped on the Taliban by US forces in Afghanistan.

Military expert Sebastian Roblin told news outlet 19fortyfive.com that “a TOS-1 rocket barrage will wipe out everything within the 200-by-300m blast zone.”

Officials have expressed concerns that Putin could turn to the deadly weapons if the Russian assault on Ukraine begins to flag.

Convoys of the weapons were spotted travelling through the Russian city of Belgorod, around 40km north of the border with Ukraine.

An official warned: “My fear would be that if they don’t meet their timescale and objectives they would be indiscriminate in their use of violence.”

They added that Ukraine’s command of its military “remains intact.”

Sharing an update on Russia’s invasion of Ukraine earlier today, the British Ministry of Defence said Putin had made “limited progress”, noting that Ukraine “retains control of key cities”.

Ukrainian forces are fighting back against the invasion, having so far destroyed 80 Russian tanks and 516 armoured combat vehicles since yesterday, the country’s deputy defence minister Anna Maliar said.

She also claimed the forces have so far destroyed 10 aircraft and seven helicopters.

The Ukrainian Ambassador to the UK, Vadym Prystaiko, said that “Russia came from all four sides” but added: “We are putting up a real fight.

“Tanks, helicopters, planes being shot down. We are defending our land.”

Ukraine’s President Volodymyr Zelenskyy announced earlier today that 137 people have been killed so far in the fighting, including civilians.

The UN’s refugee agency has said around 100,000 Ukrainians have been displaced, with thousands fleeing to nearby European states.