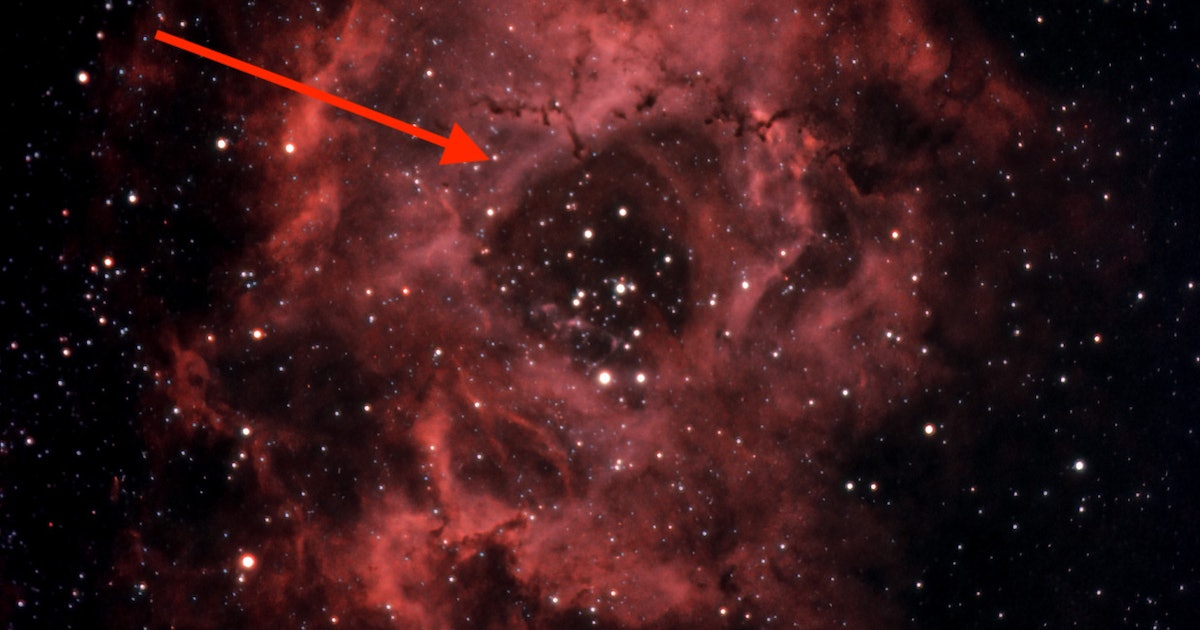 Kevin Gill knew that things were getting serious with his astrophotography when he sold an old guitar in order to buy a new camera. The software engineer has been capturing celestial objects from his backyard since 2013, and it recently started to grow on him.

“I had vowed never to sell that guitar,” Gill tells Inverse. “But I spent some more time [on astrophotography] in the last few years so I think I’ve gotten a bit more into it, and spent some more money on it.”

The Rosette Nebula shines in this deep-space image captured by Gill from his backyard in Santa Clarita, Los Angeles. Its fusion of gases illuminates the center of the image, while the nebula’s stellar inhabitants spread across the dark skies. For Gill to capture such detail from the smoggy, bright skies of Los Angeles is not easy, and requires a lot of patience, practice, and hours of exposure.

The nebula’s beauty can even be frightening as some see a figure of a skull looking towards the bottom left side. In order to capture the nebula located 5,000 light years away, Gill pointed his camera upwards for about four to five hours until midnight.

By day, Gill is a software engineer and science data visualization artist who works with NASA’s Jet Propulsion Laboratory. After work, he sets up his tripod outside to gaze at the celestial objects above.

Having a ton of experience in this field pays off as Gill has streamlined the process to make it a lot swifter.

“I zip-tied all the power stuff onto the tripod,” Gill says. “I used to have to lug all that stuff out, but now I just pick it up and lift it outside and I can control it remotely from inside.”

After setting up the equipment in his backyard, Gill lets it shoot for hours before waking up by midnight to reel it all back inside and go back to bed afterwards. Gill usually picks especially bright objects since he lives in a fairly crowded city, and his house happens to be situated beneath a pesky street light.

“I’m kind of limited, I can’t go after really, really dark stuff” Gill says. “ Eventually I’m going to throw everything in the car and drive off to the Mojave Desert or something to get something better but for now, I gotta keep an eye on what I can do.”

The Rosette Nebula is what is known as an emission nebula, meaning that its gases glow from the radiation of its young stars. It is a star-forming region whose shape is sculpted by its stars, who use the surrounding gas to come together. As some stars in the region fade out, they release material to spark new stellar births.

It is located in the constellation Monoceros the Unicorn in the Milky Way, about 5,200 light years from Earth. The Rosette Nebula spans a distance of about 100 light years, but it is not very bright. Therefore, capturing it on camera presented a challenge for Gill.

He kept every exposure frame taken over the five-hour time window, with 30 seconds per exposure.

“It was really hard to see,” Gill says. “I knew I was looking at it because I could see the stars, so I knew I was centered on it but it takes a lot of processing to really bring it out.”

Nebulae are gigantic clouds of gas and dust. Some nebulae were created from the aftermath of a dying star, while others act as a nursery for baby stars being born into the universe. After spending time capturing nebulae and their cosmic beauty, Gill admits that he finds Earth photography quite boring.