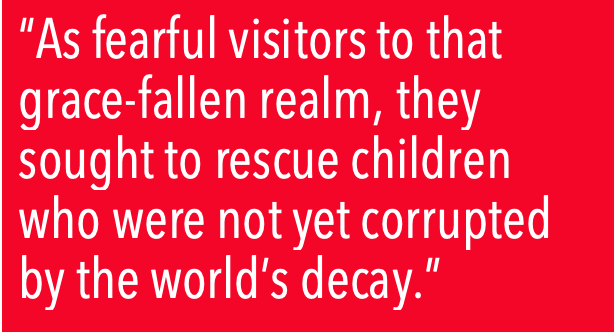 Fairies intervene in the lives of two daughters abused by their father; by David Newkirk. 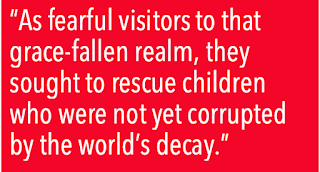 We could start with the oh-so-still air, its silence punctuated by the sound of tiny quivering wings. Or with a hundred floating, turning orbs of light glowing against the night sky. Or with the silent shadows that the moon casts when it shines on perfect circles of small stones.

But those are fairy things, and this is a human story.

Still, the fairy story began first. It started in the primordial new-shimmer of time yet unmarked, of days unnumbered. In that timeless time, the world of man was almost irresistible to the fairies. They were drawn by the cold-fire shimmer of the morning sun, its beams pirouetting on fresh winter snow. They were called by the new-life green chutes that burst forth in the early spring days, growth that seemed to announce, “I am here! I am here!” They were summoned by the miles-long whisper of leaves as the summer winds blew, whispers that answered each other in forests so dense that it was dark below.

As creatures of joy, how could they resist?

But eventually, the men began to change their world. The forests were cleared; their beckoning murmurs silenced. The soot from the factories turned the snow into gray, soulless mush. The green-hope fields of spring were plowed. The days were counted in endless rows that only circled back upon themselves.

Even so, being benevolent creatures, the fairies still came to the world of man, though with a different purpose. Now, as fearful visitors to that grace-fallen realm, they sought to rescue children who were not yet corrupted by the world’s decay. After all, was it not better, on rare occasions, to leave a lump of wood, animated by magic, in place of a beautiful child who would face a brutish life? The wood suffered not, and the child could cross over and live joyfully free in the fairy realm.

Annabelle McTavish was one such rescued child. To be fair, she had an advantage. Her advantage was not her ocean-strong blue eyes or the curls of her sun-glow red hair. It was that she and her older sister Ainsley could, from time to time, glimpse the fairies as they hovered between possibility and intention on the boundary between worlds. The fairies paid close attention to children with such a gift. Sometimes, just sometimes, such children were partly of both worlds, trapped in the world of man.

So it came to pass that one day, as Ainsley was drawing a picture of Annabelle by the creek, a fairy contingent hovered nearby. The fairies saw the girl’s father – for there was no mother, not anymore – drunkenly knock Ainsley to the ground. As she looked up from her now ruined picture, for the briefest of seconds – for a time less than a blink of her tear-drowned eyes – Ainsley beheld the most beautiful of all fairies, Queen Mab, who ruled over all Elphame from her gossamer palace. But as the mist-blue phlox and dream-purple irises suddenly bloomed anew, and the clouds moved to unveil the sun, the fairies disappeared.

As they crossed back to their world, Alette, one of Queen Mab’s attendants, asked, “What of the child who was met with violence? She draws so beautifully. It is as though her art captures both body and soul.”

“I fear it may be too late for her,” Queen Mab answered. “She may yet find refuge in her art, but her innocence has been taken. Her sister, on the other hand…”

And so, plans were made. Just the right piece of fairy wood was found. The proper spells were cast by the beams of glisten-white moonlight in a perfect rocked-ringed circle. Then, when all was done, real Annabelle was taken, and Wood Annabelle was left behind.

The forgery was adequate but not perfect. Wood Annabelle slept and rose each day. Her hair took on the coarse texture of the straw that had been enchanted along with the wood. She talked (or at least grunted) in simple sentences. “Fud,” she would say, or “Watur,” or, occasionally, in a marvel of syntactic complexity, “Fud Gud.”

Ainsley realized that her sister was not as before. She saw it when Wood Annabelle sat in the dirt rather than joining her in skipping rope. She felt it in the loss of the physical comfort from sisterly hugs not given. She heard it as silence filled the spaces where laughter had been. Whatever this was, whatever had happened, it was simply another source of sadness. It was another thing taken from her, a dream that could no longer be dreamed. An aloneness where love had been.

Yet, Wood Annabelle functioned well enough that her father sent her to work at the wool mill. He was simply glad that she talked back less than Ainsley. After all, slapping her to quiet her tongue sometimes hurt his hands.

Ainsley was spared the wool mill. In his crude-cunning way, her father knew that her hands (and more specifically, their ability to draw) were too valuable to risk to the spinning jennies. Many a child had lost a limb at the mill, and then what were they suitable for? What work could they do to bring him money for drink? He sent her to the street corners with a cup for coins and a command to draw portraits until it grew too dark.

And draw she did, sketching flowing, almost living compositions that spoke of the subject’s inner life and hidden beauty. Of dreams that they did not know they had. Of the spirit that sought to break free from the dull-day, grey-struggle world that their bodies inhabited. Of their souls.

One day, when the cold rain kept potential patrons away, Ainsley retreated beneath the covered section of a train platform. Her mind turned to the fairy that she had seen by the creek. She drew for hours as the rain washed away some of the ugliness outside. Her drawing of Queen Mab was more than an image – it was an act of longing. Of the desire for something better, something new, shining with oh-please-God-let-there-be-more-than-this hope.

Whatever it was, the shiver ended when the woman saw Ainsley’s drawing and smiled a smile that would allow nothing but a smile in return. “Child!” the woman exclaimed, “How is it that you have come to draw the Queen of the Fairies?”

Ainsley felt the slightest tinge of fear returning. She frowned. “Are you a witch?” she asked.

The woman laughed. “No, child. Witches serve only themselves. That which I once was knew suffering. That which I am now seeks to ease it. If a name helps, you may think of me as a white lady. Your wishes pulled me here and I serve only you.” She paused. “But you must tell me. How did you know to draw this? It is the most beautiful portrait of Queen Mab that I have ever seen.”

“I saw her,” Ainsley answered. “The day before my sister changed. She doesn’t play anymore or laugh. She barely talks.”

“They have taken her,” the old woman said. “They have left a changeling. They mean well. Of that I have no doubt. But good deeds can have unintended consequences.”

She paused; her forehead even more wrinkled than it had been before. “Do you want her back? Think carefully, for the fairies are not without their own defenses.”

The tears that welled in Ainsley’s eyes fell and stained the portrait. “Y-yes. I am alone without her.”

The woman looked at the tear-stained portrait. “You must draw the Queen again. It must be your masterpiece. You must carry it with you, and it must fill your mind. When the Queen’s spirit is divided – part in your art, and part in her world – she will feel incomplete. She will come to you. And then you must name your bargain. A trade – that which makes you whole, for that which makes her whole.”

Ainsley looked down at the drawing. “But…” she started to say as she looked back up.

But the woman was gone. The faintest wisp of almost-smoke, a dazzle-dream glint, a color that tasted like honey, lingered where she had stood. Then there was nothing. The rain had stopped, and the wine-reds of sunset lay atop the horizon as the night covered the last of the day.

Ainsley’s stomach growled. But there was no time for food. With luck, her father might already be in a drunken stupor and would not miss her. The thing that had replaced Annabelle was there if the stupor turned to anger.

Ainsley had work to do.

She hid and began to draw. She drew until the night became a breeze that whispered “sleep.” Then she dreamed of fairies, dancing in pairs to smooth-round music, a stately procession that began on the ground and took to the air. A frolicking of wings; a synchronous symphony of swirls. She saw Annabelle and the other ever-young children below clapping as the dance grew more and more intricate.

It was a dream that glimpsed the other world. As the fairies returned to the ground, Ainsley woke to draw again. When the night stars gave way to the new day’s birth-light, she took her drawing and ran to the creek.

Meanwhile, in Elphame, Queen Mab came to feel a heaviness, a dullness. Possessed of a vague sense of being watched, she avoided the grand cotillion. She barely sipped her glass at the fairy tea party.

Alette summoned Hermes, the fairy alchemist, to see if he could concoct a curative potion.

Hermes was puzzled. “When you were among the humans,” he asked, “did any of them have a box of sorts that might have taken your image? These devices – cameras – can imprison spirit.”

“No,” Queen Mab answered. But then she remembered the little girl by the creek and Alette’s words. “But there was a child that drew most beautifully. She saw me, I think.”

“Aha!” Hermes exclaimed. “I wager, my Queen, that she has drawn you. More than drawn you, in fact. A piece of your soul is lodged in that drawing. No potion will help. You must find her and convince her to destroy it.”

Queen Mab knew what she must do and where she must go. In a flash of light, she crossed the boundary between worlds and hovered by the creek.

She saw Ainsley. “Child,” she said, “Why have you done this? You must set me free. I have done nothing to harm you.”

“You took my sister,” Ainsley said. “She was the only good thing that there was.”

“And you want her back? You would bring her back to… this? To the pain that is your world? You ask that I trade her joy in return for my freedom? You ask too much.”

At that moment, at that hinge in the door of time, Ainsley knew precisely what she wanted. “You have mistaken my intent,” she said. “I am not asking you to return Annabelle. I am asking you to take me to your home. I am asking to live with her in your world.”

Ainsley wadded up the picture with her other hand, tossing it into the creek. Blithe-bright blue beams of beckoning light began to fill her vision. The light was a tide that crashed against the shore of the world until there was only the light. Then, it faded.

The delicate castles, the green-true hills, and blue-sparkle skies of Elphame filled her eyes.

As Annabelle ran towards her, Ainsley’s life began anew.