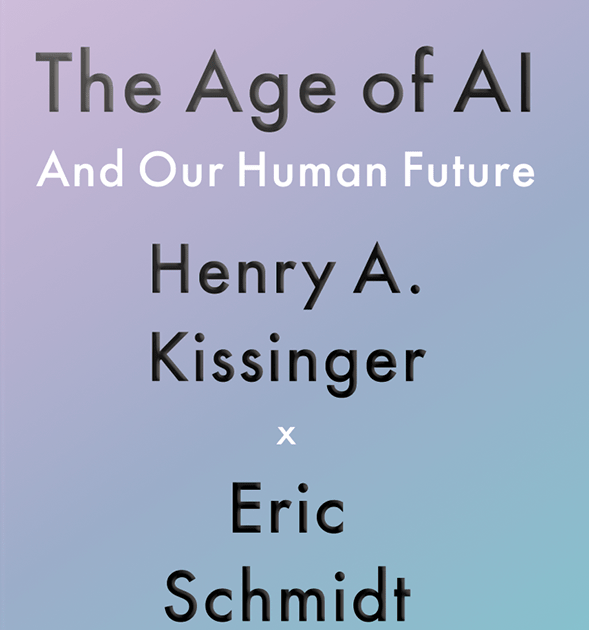 Even as technology links people together across the globe, our differences seem to be driving us further apart. In some ways technology offers greater safety and security than ever – and in other ways, unprecedented threats to the very civilization that engendered it.

Meanwhile, there is a movement to hold AI accountable – requiring alorithms used in decision-making, such as health care, housing, employment or education – to be ‘audited’ for bias.

At the Noema site, you can read an interesting summary by Nathan Gardels of a new book, “The Age of AI And Our Human Future,” co-written by three authors: veteran Cold War strategist Henry Kissinger, former Google CEO Eric Schmidt and computer scientist Daniel Huttenlocher. The Age of AI and our Future asserts that dispersal of burgeoning data systems has increased the danger of inadvertent War by Miscalculation among the world’s great powers. 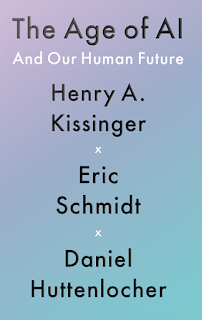 Gardels notes, “The paradox that technologies of connectivity are dividing the world anew is not lost on the authors. Instead of uniting the planet in a common perspective, the evolution of AI and other tools that frame the use of data, the flow of information and the openness of expression reflect the civilizational and cultural values that undergird them and stand at the heart of divergence between East and West.

“In time,” the authors predict, “an industry founded on the premise of community and communication” may end up “uniting blocs of users in separate realities… evolving along parallel but entirely distinct lines and with communication and exchange between them growing increasingly foreign and difficult.”

For the authors, this divergence is compounded by technological escape from the control of human reason historically grounded in the locality of place. As they put it:

“Now day-to-day reality is accessible on a global scale, across network platforms that unite vast numbers of users. Yet the individual human mind is no longer reality’s sole–or perhaps even its principal–navigator. AI-enabled continental and global network platforms have joined the human mind in this task, aiding it and in some areas, perhaps moving toward eventually displacing it.”

Well, well, as I frequently point out (with slides) at speeches, this is not the first time that advances in three areas — knowledge-access (writing, printed books, newspapers, radio, TV) and vision (glass lenses, telescopes, scientific instruments) and attention (perspective and other tools of focus) — have triggered dangerous disruption… before finally becoming tools for expanded human achievement, consciousness and wisdom.

(Biggest examples, the printing press tore Europe to shred, before settling in as a generally positive source of wisdom. The arrival of radio and loudspeakers in the 1930s damn near killed civilization… till they saved it. The one new comms tech that had generally positive outcomes from the start was … (get ready)… television!)

Anyway, there appear to be valid points in the Kissinger/Schmidt/Huttenlocher book and  solid practical advice…

… that alas seem to ignore the fundamental driver of potential conflict, which is a ticking cultural clock.

Foremost, there is a reason that all the world’s oligarchies are joining together in common cause, from communist hierarchs and “ex”-communist Kremlin lords to casino moguls, mafiosi, murder princes and inheritance brats.

They all face only a very short window to re-establish quasi-feudal, inheritance-based rule, of the sort that oppressed 99% of our ancestors for 6000 years. And you can bet they are hoping that developments in AI will lock in their pyramids of power, forever.

In Vivid Tomorrows: Science Fiction and Hollywood –  I describe out the memes preached and spread by Hollywood are especially infectious among the world’s youth, especially when rising prosperity is accompanied with a sense of safety/satiation.  The most common Hollywood themes: Suspicion of Authority (SoA), diversity, individual eccentricity and empathy are tantamount to massive propaganda for Enlightenment values. Values that, should they fully take root, will be death to oligarchy, over the long run.

This is the real reason for the banning of most western entertainments in certain nations. It is the top reason for drumbeats of resentment and hate being pounded across their controlled media. Individualism and suspicion toward unaccountable elites will be lethal to pyramidal power structures and that must be prevented soon, lest those values embed in the world’s vast majority.

Our danger does not arise from the lack of hot line conversations between heads of state. It is rooted in a certainty among oligarchs of all types that uniting to crush the enlightenment experiment is essential, if those oligarchs are to pass paramount power to their sons.

While our worried gaze is on the Russia-Ukraine crisis, let’s keep a broad sense of danger. The annual Pentagon appraisal of China’s growing military might is most interesting.

My amateur assessment: All the saber rattling from that New Power is counter-productive. It is not long-term effective to deeply offend and threaten all your neighbors, driving them into the arms of your more benign and historically friendly rival. Several of those neighbors – especially those in Oz – have respoded by digging in their heels.

I especially doubt the ability of any invasion force to cross the Formosa Straits if they are contested. Even if the nearby continental power gains utter control of the air and destroys all rival forces, denying those rivals entry, air superiority does nothing about hundreds of lurker torpedo-mines, waiting quietly in the mud. I doubt they could be cleaned out, even with underwater nukes.

But what do I know? Indeed, the report notes that notion of an actual invasion seems beyond the New Power’s capabilities.

‘Large-scale amphibious invasion is one of the most complicated and difficult military operations, requiring air and materiel superiority, the rapid buildup and sustainment of supplies onshore, and uninterrupted support. An attempt to invade Taiwan would likely strain [NP’s] armed forces and invite international intervention. These stresses, combined with…the complexity of urban warfare and counterinsurgency…make an amphibious invasion of Taiwan a significant political military risk.’

This analysis seems to agree with my portrayal, and further notes that NP appears to have made a deliberate choice, when they took full control of H.Kong. They surely knew that would end all chance of political rapprochement with T’aipei or any major constituencies on the island.