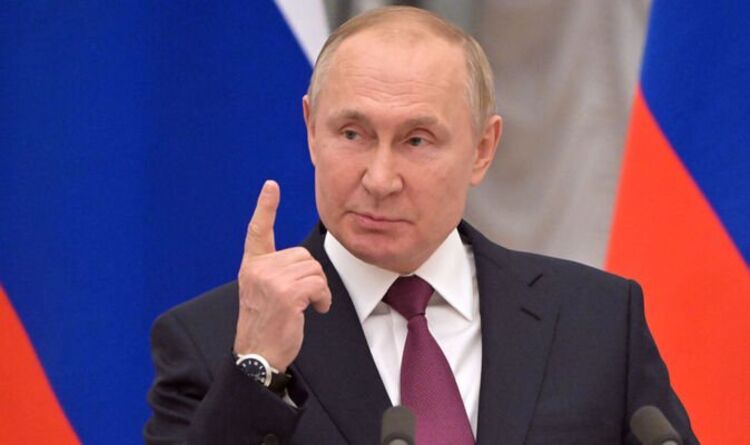 The Kremlin said yesterday, on Tuesday, it was pulling back some of its troops from near its neighbouring country. While drills will continue, the Defence Ministry announced some units were being returned to their bases. NATO described the news as being cause for “cautious optimism”.

Speculation has now arisen over what led to the decision, with Moscow correspondent Oliver Carroll questioning whether the return of some troops to permanent bases signalled the “start of de-escalation” or simply a “feint of hand”.

Reports from one sanctions expert suggest the apparent step-back could have been caused, at least in part, by the threat of an “economic crisis”.

Western nations have already warned a package of sanctions will be unleashed upon Moscow if it launches an invasion.

The number of limits that could be imposed is almost “inexhaustible”, according to Janis Kluge from the German Institute for International and Security Affairs.

He said: “In principle, there is an almost inexhaustible number of possible sanctions.

“The only limit is your own imagination.

“Russia is so deeply intertwined with the western economic world that every single connection can be targeted.”

This does not mean the West’s position is an easy one, Mr Kluge added.

READ MORE: Desperate Boris begs Putin to ‘step back’ as he gears up to invade

But Mr Kluge stressed a lot more could be done yet, noting the “West superiority in this sanctions game”.

He added that imposing strict sanctions could also “backfire” for Western nations, and warned leaders must ensure these do not hurt their own economies too significantly, do not affect the Russian population and should also be able to be lifted fairly easy so the targeted country (in this case, Russia) can see a “way out”.

This comes amid the massing of around 100,000 Russian troops, according to Western reports, around the Ukraine border.

Moscow said in diplomatic talks last month it had “no plans” to invade its neighbour.

He told Mr Putin: “It seems to me that our possibilities are far from exhausted.”