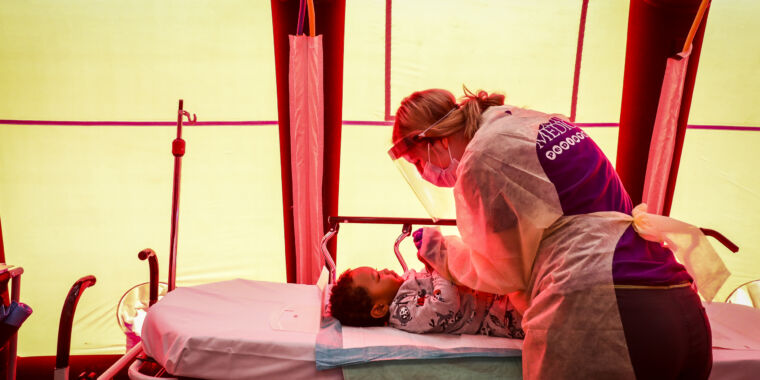 Despite being widely seen as mild, the omicron coronavirus variant has been brutal on children and adolescents—particularly babies and toddlers, who are still ineligible for vaccination.

According to a study published Tuesday by the Centers for Disease Control and Prevention, the peak rate of pediatric hospitalizations during the recent omicron surge was four times higher than the peak seen during delta’s wave last fall. And the largest increase was seen in children ages 0 to 4, who had a peak hospitalization rate five times higher than that seen amid delta’s wave.

The study authors, led by CDC emergency response team researcher Kristin Marks, were careful to note that incidental cases of COVID-19 in hospitalized children do not account for the jump in rates amid omicron. Marks and colleagues looked carefully at medical charts from hospitalized children during both the delta and omicron waves. They compared the proportions of children coming into hospitals who had COVID-19-related symptoms at admission and were marked as being admitted specifically for COVID-19. Between the two waves, they found no significant differences in those proportions.

“Consistent with national hospital surveillance data, the findings in this report indicate that the omicron-predominant period had higher rates of pediatric COVID-19 hospitalizations than the Delta-predominant period,” Marks and her colleagues concluded.

Marks et al. also noted that omicron produced severe disease in some children and has the potential to cause long-term symptoms. “Observed indicators of severe COVID-19 among children and adolescents, in addition to the potential for longer-term sequelae, highlight the importance of multicomponent strategies to reduce the incidence of COVID-19, including vaccination of eligible persons and other prevention measures,” such as masking, they wrote.

The study drew data from a hospital surveillance network that spans 99 counties across 14 states. The authors included medical records of children who tested positive for COVID-19 and were admitted to a network hospital between July 3, 2021, and January 22, 2022. The omicron wave was considered to span December 19 onward. The authors determined rates of cases based on pre-existing population data on the areas surrounding the hospitals.

During the two waves, pediatric weekly hospitalization rates peaked during the weeks ending on September 11, 2021 (amid delta) and on January 8, 2022 (amid omicron). During the omicron wave, weekly pediatric hospitalizations peaked at 7.1 per 100,000 children, which is about four times higher than delta’s peak rate of 1.8 per 100,000.

When the researchers looked at admission rates to intensive care units, they also found an increase during the omicron wave. Peak ICU admissions amid omicron were 1.4 times higher than during delta.

Vaccination appeared to strongly protect against pediatric hospitalizations, but vaccine availability was limited across the study. The only age group that was eligible for vaccination throughout the whole study was the 12- to 17-year-olds. Based on December data, hospitalization rates among unvaccinated adolescents were six times higher than among fully vaccinated adolescents in that same age group.