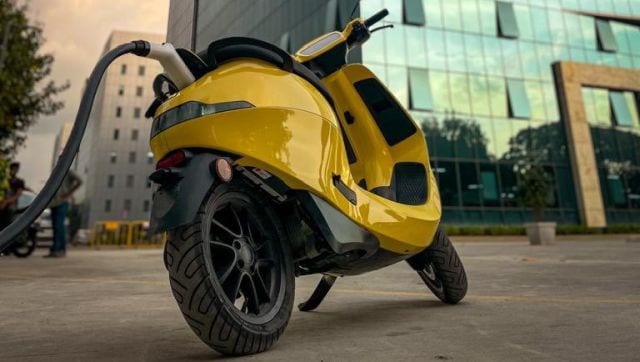 Ola Electric has clocked around 1,766 total electric vehicle (EV) registrations in the country since 15 December, according to the government’s Vahan dashboard, as compared to 4,000 scooter shipments the company had claimed to have made in the month of December.

A majority of these registrations were done in Maharashtra and Karnataka, followed by Gujarat, Odisha and Tamil Nadu.

The company registered about 238 EVs in December, about 1,102 EVs in January and 424 EVs in the first week of February, data shows.

To be sure, Vahan dashboard does not capture data from Andhra Pradesh, Telangana, Madhya Pradesh, and Lakshadweep, due to which the number of registered EVs in these states are not available.

An Ola Electric spokesperson told Moneycontrol that Vahan is not an accurate reflection of their dispatch and sales data, since there is a “long lag in data getting updated on the dashboard” and it only captures permanent registrations.

To put things in context, EV registrations for rival Ather were at 1,880 for the month of January according to the Vahan dashboard, while the company said it sold 2,825 units during the month.

This development comes on heels of Ola Electric raising over $200 million at a valuation of $5 billion from Tekne Private Ventures, Alpine Opportunity Fund, Edelweiss, and others.

Ola Electric, which was spun out of the ride-hailing major Ola in 2019, had started deliveries of its electric scooters on 15 December, a significant delay from its initial plans of an October delivery timeline.

Ola had told Moneycontrol at the time that the discrepancy in both the numbers was because different state RTOs upload their data on Vahan at a different pace, since some of them are on the older version of Vahan.

It’s worth noting that Ola has taken a direct-to-customer approach, wherein it is delivering the vehicles directly to the customers’ homes, instead of the traditional dealership model. On 31 December, Ola group CEO Bhavish Aggarwal had said on Twitter that the registration took longer than anticipated since a fully digital process was new for all stakeholders.

“Lots of learnings for us on varied RTO systems, regulations across states. Will be faster with registration in future!” he said on Twitter.

In a communication to Ola Electric customers on 14 January, Ola Electric had stated that deliveries of scooters can take 10-20 days after they have been dispatched from manufacturing facility, depending on the customer’s location and the RTO process requirements in their city.

In the same communication, Ola also said that it was prioritising the production of its costlier variant S1 Pro (which costs Rs 1.3 lakh) since a “vast majority” of its customers have purchased this variant and it will be making the S1 variant (which costs Rs 1 lakh) only in late 2022.

All customers who had booked the S1 variant, were now being “automatically upgraded” to S1 Pro hardware. Users will be able to unlock the Pro features such as increased range, hyper mode, hill hold, cruise control and voice assistance, by paying an extra Rs 30,000.

The company noted that this software upgrade was optional and customers can also choose to exercise this choice at a later stage. An Ola spokesperson said those receiving the S1 Pro still benefit from a better range of 105 km, which is less than the 135 km real-world range of the software-activated S1 Pro, but more than that of the S1.

“If you still wish to buy our S1 variant, we will notify you as soon as we put that into production and you can make the final payment then,” Ola said in the communication on 14 January.

“We’re installing across India and will make them operational in 6-8 weeks. Will be free for use till end June 2022 for all customers,” Aggarwal said.

The company plans to install over 4,000 charging points through next year, he said. In April 2021, Ola Electric had stated plans to invest $2 billion over the next five years along with its partners to set up more than one lakh charging stations across 400 cities.

Ola Electric is also among the 10 firms that have submitted bids under the Rs 18,100 crore production linked incentive (PLI) scheme for Advanced Chemistry Cell (ACC) battery storage, the government said on 15 January.

The Bengaluru-based mobility firm is gearing up for a public market debut later this year. On 16 December, it raised $500 million debt financing from marquee international institutional investors through a Term Loan B route, joining the likes of Byju’s and Oyo.