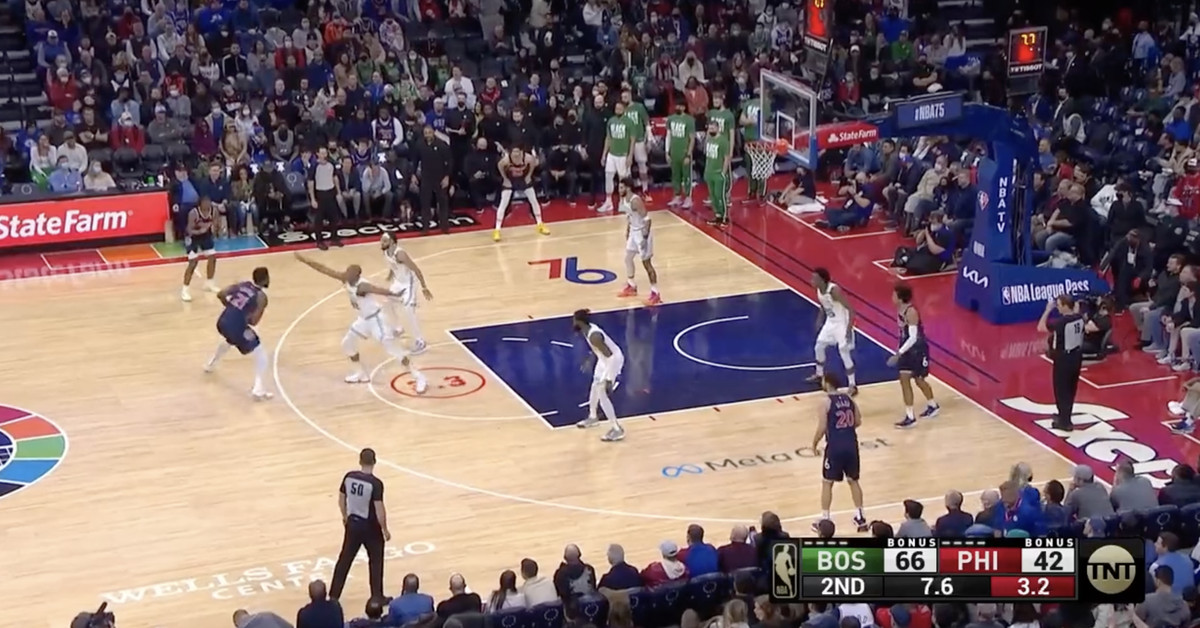 The Philadelphia 76ers swung one of the biggest moves in trade deadline history when they acquired James Harden in an 11th hour deal for Ben Simmons, Seth Curry, Andre Drummond, and draft compensation. The trade gives Philly an elite guard to pair with MVP front-runner Joel Embiid, while also giving Daryl Morey the return he was always looking for during Simmons’ holdout.

Harden won’t play for the Sixers until after the All-Star Game on Sunday as he recovers from a hamstring strain, but he’s already been in the building and around his new teammates. On Tuesday, the Harden newscycle provided multiple updates with his introductory press conference, his outrageous gameday outfit, and a clip of him trying to teach Embiid how to do his patented double-stepback at practice.

Apparently Embiid is a quick learner, because hours after Harden and assistant coach Sam Cassell were giving him pointers on how to pull off the move, he actually tried it in a game.

With the Boston Celtics blowing out the Harden-less Sixers on their home floor on Tuesday, Embiid attempted the double-stepback at the end of the half. He was called for traveling.

In addition to being a master of his craft on the court, Embiid is also undeniably one of the league’s funniest players. The meme he posted after Simmons was traded was immediately iconic. There are a million more examples of Embiid’s sense of humor over the years, but this play might take the cake.

I just can’t believe he actually tried this move in a game just hours after a viral video showed Harden trying to teach it to him. To do it in a blowout loss, during a nationally televised game on TNT, with Harden on the sidelines is just unreal.

Watch the practice clip again. Cassell keepings telling Embiid he’s actually traveling when he tries the move. The assistant coach says Harden is doing it in two steps, while Embiid is taking four steps. This played out in the game exactly as it did in practice.

The Sixers got absolutely pasted by a Celtics team that is suddenly playing the toughest defense in the league. The Sixers need a happy and healthy Harden in the worst way right now.

In the meantime, Embiid continues to be a true delight. He really just did that.