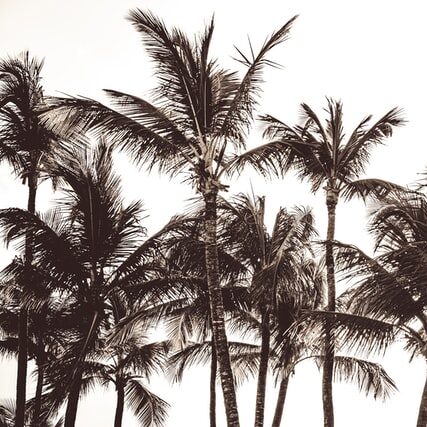 She counts the children as they come through the door—one, two, and three—to reassure herself that they are hers. She can’t say just how happy she is to see them; she’s missed them all summer long. She hardly recognizes them; they’re browner than ever before, and somehow warmer to the touch. She hugs them and her hands come away coated with fine grains of sand.

Both boys come back taller and sporting fresh haircuts. The girl is fuller around the hips and her hair is braided in a different style. All three come back with more clothes than when they left. They return with an extra suitcase stuffed full of shorts, tees, and swimsuits she never bought them, in colors, patterns, and prints she never knew they liked.

They’ve spent the summer in Puerto Rico, staying with their father and his new wife, and they have now returned to Brooklyn as strangers. They are the not the kids she sent to the island, not the children she put on the plane, but they are what the tide returns. She can feel the difference in their sun-warmed skin. All summer they’ve slept in a house and, now that they know the difference, her little apartment is no longer enough. She can read the truth in their ocean-filled eyes—now they know that they are poor. They’ve traded in a summer of riding the subway for being ferried in their father’s car; they’ve swapped playing in the public pool for basking on the beach. At dinner that night they tell stories of knocking mangoes off of trees, of their father taking a machete to a coconut, and of them drinking coconut water straight from the gourd. They tell her that the coconuts in Puerto Rico look nothing like the ones in the cartoons resembling hairy bowling balls, and that instead they are large, smooth, and green. Now they know things like this, details she can hardly imagine.

And isn’t this what she wanted? For them to spend quality time with their father and get to know his culture, to know that it was also theirs, to not have to choose which side of themselves to nourish while the other side withered?

She waits for them to become hers again, yet even after they’ve been home for hours, they don’t revert to the children she remembers. All afternoon and evening they wander the apartment disoriented, using words she doesn’t recognize to ask for things she doesn’t have. Now, instead of Mom or Ma they all call her Mami. They’ve carried the island back with them, and around them it shimmers, hovering— she can sense its invisible, tangible pull. But no matter who they’ve become, they spare her their summer stack of Polaroids so she doesn’t have to see their father’s new life without her. On their way off to bed, they file into her room and tell her how they’ve missed her, how happy they are to be back. They shower her with kisses and she feels their kisses drying, like saltwater, on her cheek.