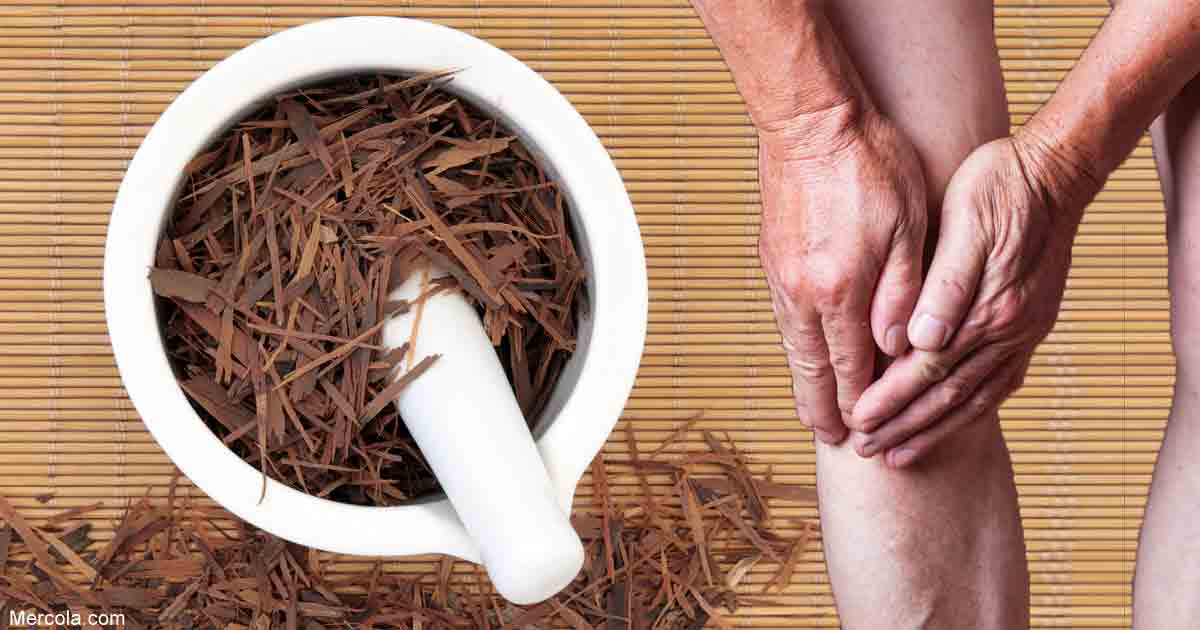 This article was previously published April 2, 2018, and has been updated with new information.

Pau d’Arco — made from the bark of a large evergreen tropical tree found in the rainforests of the Amazon, South America and Latin America1 — is a potent antiparasitic remedy with a long history of use by indigenous populations.

It also has antimicrobial, antiviral, antibacterial, antifungal and anti-inflammatory properties, as well as analgesic, antioxidant, astringent and laxative effects. It’s one of the supplements I take on a daily basis for its mitochondrial, immune-boosting and antiaging benefits.

Uses and Benefits of Pau D’Arco

Traditional and indigenous medicine has used Pau d’Arco for at least 1,500 years for the treatment of wounds, aches and pains, malaria and other tropical diseases, colitis, respiratory infections, fever, inflammation, boils, ulcers and more. Many of its benefits have been traced back to blood-cleansing compounds and compounds that inhibit harmful microorganisms.

Lapachol, for example, has been shown to be an effective treatment against malaria, and quercetin is a powerful antiviral. In more recent years, studies have confirmed Pau d’Arco’s ability to:2,3,4

Interestingly, one of the ingredients in this tree bark is beta-lapachone, which is a potent catalyst for a molecule called nicotinamide adenine dinucleotide (NAD+). NAD+, found in every cell in your body, is a receptor for electrons in the electron transport chain in your mitochondria. By increasing NAD+ intercellularly, Pau d’Arco helps improve mitochondrial ATP production. This is beneficial for health in general, but it’s particularly important if you’re fighting disease.

NAD+ also acts as a signaling molecule — it basically acts as a sensor for stress and disease. (For an extensive discussion on what NAD+ is, its benefits, the effects of low NAD+, and various ways to boost it, see SelfHacked.com’s article, “How to Boost NAD+: The Molecule of Youth.”5)

NAD+ declines with age, and antiaging researchers have identified this molecule as one of the primary control mechanisms for slowing down the aging process,6 and may actually be the most critical one.

Indeed, nicotinamide mononucleotide (NMN), an intermediate compound in NAD+ biosynthesis, has been shown to treat diabetes in mice. As explained by the authors:7

Other animal research8 suggests boosting NAD+ with NMN helps grow new blood vessels in the muscles of old mice — in part by boosting the “antiaging enzyme” SIRT1. As a result, blood flow increased, and the animals’ endurance levels increased by as much as 80%. As reported by STAT News:9

“The treated mice also benefited from exercise like mice half their age. In young animals, exercise spurs the creation of new blood vessels and boosts muscle mass, but that effect weakens with age in both people and mice. NMN restored the blood-vessel- and muscle-boosting effects of a good treadmill run, basically ‘reversing vascular aging in the mice,’ said study co-leader David Sinclair of Harvard Medical School …

The blood-vessel benefits of NMN didn’t happen if the mice lacked the SIRT1 gene, probably the brightest star in the antiaging firmament. In the 1990s, it and the six other genes belonging to the family called sirtuins took aging research by storm, as biologists showed that increasing the genes’ activity extended life span in yeast, roundworms, and fruit flies by up to 30 percent.”

A Simple and Cost-Effective Way to Boost Intracellular NAD

NAD+ supplements and injections can be costly, but there’s a simple and inexpensive way to boost NAD+ using Pau d’Arco.

A Powerful Immune Booster Thanks to Quercetin

Another powerful ingredient in Pau d’Arco is the quercetin,10 an antioxidant flavonol shown to cleanse the blood and combat inflammation and viral illnesses. It also acts as a natural antihistamine. As a supplement, quercetin has been used to ameliorate obesity, Type 2 diabetes,11 circulatory dysfunction, chronic inflammation, hay fever and mood disorders.12 A number of studies have also highlighted quercetin’s ability to prevent and treat both the common cold and influenza.13

In a study funded by the U.S. Defense Advanced Research Projects Agency (DARPA), published in 2008, animals treated with quercetin were challenged with a highly pathogenic H1N1 influenza virus. Again, the treatment group had significantly lower morbidity and mortality than the placebo group. Quercetin’s powerful antiviral effects have been attributed to three main mechanisms of action:

Other research,14,15 funded by the U.S. Department of Defense, found quercetin reduces viral illness and boosts mental performance following extreme physical stress, which might otherwise undermine your immune function and render you more susceptible to infections.

To investigate the effects of quercetin on viral illness, 40 cyclists were divided into two groups: Half received a daily dose of 1,000 mg of quercetin in combination with vitamin C (which enhances plasma quercetin levels16,17) and niacin (to improve absorption) for five weeks while the other half received a placebo.

Three weeks into the trial, the athletes rode a bicycle for three hours a day, three days in a row. Analysis of blood and tissue samples collected before and after exertion revealed 45% of the placebo group contracted viral illness after the physical stress, compared to just 5% of the treatment group.

The results were considered “groundbreaking,” as this was the first clinical, double-blind, randomized, placebo-controlled study to identify a natural plant compound capable of preventing viral illness.

A number of studies have confirmed quercetin’s effectiveness against influenza and other viruses, including hepatitis B and C viruses. For example:

As you can see, Pau d’Arco has a wide variety of benefits, from boosting your general health and immune function to combating infectious, chronic and age-related disease. It can be used in a variety of forms, including:

To ensure quality and effectiveness, look for products that specify using the inner portion of the bark from the Tabebuia impetiginosa species of Pau d’Arco, as this is the most potent part of the tree. Many will use both inner and outer bark, resulting in diminished quality.

Keep in mind that, while generally safe with few side effects, Pau d’Arco may cause upset stomach and/or nausea when taken at high dosages. Stay within the recommended dosage for the product you buy, as excessive amounts could be toxic and/or produce side effects. Also, Pau d’Arco is not recommended for children and pregnant or breastfeeding women, and should be avoided if you’re on blood thinners as it may increase your risk of bleeding.