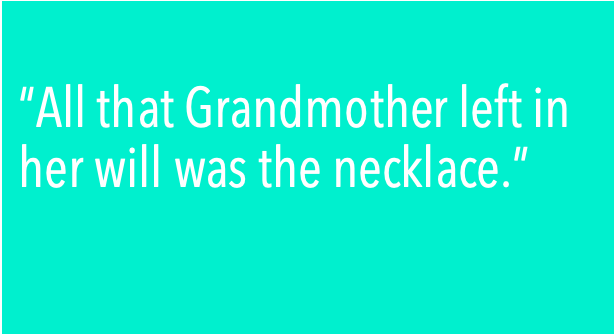 Twenty-nine grandchildren are kept in thrall of their seafaring grandfather, his mysterious adventures, and the beautiful pearl necklace he gifted to their grandmother; by Tom Sheehan. 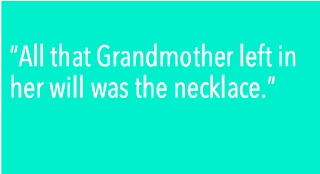 The only heirloom my grandmother had was her pearl necklace, a gift from Grandfather, the single piece of property she clung to during the Depression and the years that followed. It was cached for years in a small box entrusted to a small sewing table, which none of us dared touch. The necklace was exquisite in its perfection of thirty pearls, each one a most marvelous entity in its own presentation. It was, as seen on rare occasion, so resplendently beautiful on her neck, so icily beautiful, we wondered for its reward what ship the old sea captain had run aground.

He grew up on N. Sheffield, not far from the Chicago River North Branch. First on the river and then on the lakes he had come of age. Water was his milieu however it spread, and it brought a maturity to him, and a yearning that ultimately only the seas could attempt to satisfy. It seemed when he went to sea he stayed there for an inordinately long time, some lifetimes of his grandchildren it proved, two of them gone while he was on one long voyage. The Windy City was too far inland for the sailor to navigate too often.

As for the pearls they made us wonder into long dark hours whenever the bearded one came to roost, short as it was. We wondered for such pearls what strange cargo lade aboard what strange ship. Or what mysterious passenger carried away from the shade of what prison or political fray. Light would dance on the gems, or bounce off them, telling stories of their own, mysterious stories of origin and marketing, of some kind of hijinks no less. Often, I had imagined them being lifted one by one from the Pacific floor by a great-chested diver eluding a giant black squid, and, through a series of trades, sales or thefts (none of us ever knew), they had eventually come stringed into grandfather’s hands. For their fifteenth anniversary he had given them to grandmother on his return from an eight-month cruise.

Some years later, after that gift was ceremoniously placed about her neck, he went to sea again and never came back. In the vast South Pacific, in the torment of wild storm, his ship disappeared. Thereafter, from the confines of that small box in that small sewing table, the necklace became part of her everyday attire, a mere but glorious neckpiece. She refused to store it in a safe cache, preferring to wear it like a widow’s emblem, her insignia, her star in the window.

We, of course, had invented a hundred different scenes of its receipt into family hands. Grandfather, sea captain, was a shrewd bargainer, an adventurer, and possibly not averse to taking to bosom what might come easily. Life at sea, he had often said, was perilous and boring only in menial tasks, and was filled with opportunity. One had to be ready for anything, he’d say, as if a near-private penance of one’s own was earning its way with him.

Visibly, at about her seventy-sixth birthday, the grand lady began to fail. Her eyes, now and then but always distressingly, became fixed with an element of distance in them, a pale green light way back in a soft bank of memory. She would begin to nod and would adapt that look to her eyes. Drifting slightly became a daily sign as she wandered between those banks of memories. Older members of the family, probably with mortgages or some kind of pain of their own locked up inside, began to wonder what she would do with her necklace. Unfortunately, it became the concern of too many of them. Young John, being the oldest of her children, expected the necklace to be entrusted to him. Softly one evening, as if he were passing a tidbit of knowledge, he said, “It should pass from the oldest to the next in line,” and he said it with his head at an inquisitive angle, yet fully expecting no rebuff, no question. I figured he was really taking a poll of the family in his own way. He was not my favorite relative.

I was the oldest of the grandchildren and I always supposed that I was more like Grandfather than even his children were. A strange kinship had developed with that sailor so long gone. I replied to young John, “If so, Uncle John, then not from you to your oldest child, but to Mary who is next in line of Grandmother’s and Grandfather’s children.

Young John appeared irked at my question. “That would depend on time and circumstance.” His voice, as usual, was soft and mushy, so unlike the man who captained three ships and had probably gone down with the third one.

Nodding, I said, “I understand,” and with a sincere smile, added, “I know what Grandfather would do.” John, as always, did not like the edge of things, not the crust on his toast, or the nexus to an argument, or how I stressed certain of my words.

Grandmother, of course, heard what I said, the tentacles of her grapevine hardly ever missing a word touching on her family. At my next visit she smiled at me, that quietly reflective smile of charm and intrigue, with it the mysterious broadcast of understanding she had long given to me. I saw it more plainly exposed than others, too wrapped up in themselves, or too mushy for their purposes, the way John went at things.

That old sea captain had loved her and I knew why.

The gracious and loving lady, who even in her frailty still looked seaward every day as she had done for years, died in her sleep one night as peaceful as a rose taking leave from a late August vine. A sudden exhalation, a petal movement, and she was gone.

There were twenty-nine of us in the family, children, grandchildren, great grandchildren. All that Grandmother left in her will was the necklace. The directives of the will were explicit, and strange to many in the family. Each child, grandchild and great grandchild was given a pearl from the necklace, which accounted for twenty-nine of the pearls. The thirtieth was also and specifically given to me. I sat there in front of all of them at the compounded meeting looking at my two pearls.

At first, I felt the agony of the splitting of the necklace, my heart twisted by the severing. A quick flash of both grandmother’s and grandfather’s faces came into the back of my mind. From that brief glimpse, as if I had been bequeathed a sudden and omniscient power, all her last thoughts blazed into my mind. Awkwardly I felt that the capture of her smile had shown up on my face. Young John, I think, must have seen the content of that smile first, recognized it, accepted the message. Until the final realization came upon him, it must have bothered him with its distinction. At first, he was not prepared to do anything about the trade of knowledge, but I had no worry on that account.

And it didn’t really take too long for responses. Not long at all. Those who did not understand or who were too young to see the prospect of the situation, must have been led to the proper action.

Young John, in true wisdom, was the first to make a move. Later, after the meeting, he came to me, the elder to the younger saying a lot. “Martin,” he said, his face filled with the most honesty and enlightenment I’d ever seen on it, “Grandmother didn’t get to say all she wanted to say. But I guess she said enough. She really knew us, didn’t she?” He stretched his hand to me and opened it. In his palm lay the perfection of a pearl, huddling like a newborn in its first shelter; quiet, docile, beautiful, but latent with a power that could grow to ferocious dimensions. He dropped his pearl into my hand.

By ones, by twos, by threes, they came to me in the weeks following, after measurements in their odd manners, checking their own statuses, to deposit their pearls in my hand, to rejoin them in the necklace, to bring the unwritten lines of grandmother’s will to the ultimate conclusion.

Eagerly each day I looked forward to the next contributor’s placing his pearl in my hand, holding my palm out as if to shake a hand. At times, admittedly, I knew an agony when one of them did not come forward. That was a void that quickly made its way through the ranks of the family.

That the score was being kept was obvious.

And one day I had twenty-nine pearls in a little velvet-lined case. From the very first day I had promised myself that I would not restring the pearls until they were all together again.

It was my son who was the last one to come forward. Smiling, gleaming, the happiest eight-year-old boy I had ever seen, he came to me. From his pocket he took a paper, made a check mark on it and handed me his pearl. His face shone brighter than the lights from the gas station down the road.

“Am I the last one, Dad?” he said. “Am I really the last one? Did I keep good score?” Grandmother’s grin was all over his face. To be sure they were all joined, he had saved his pearl for the last.

I was impelled to move. “What do you want to do when you grow up, Son?” It was a question I had to ask, seeking punctuation, reason, decision.

The face of grandmother was in front of me, the eyes of grandfather stared back at me. “I don’t want to grow up, Dad,” he offered, “I want to be a kid and wear sneakers all the time.” He nudged me, looked into my eyes.

One day, for sure, this child philosopher would have custody of the necklace.

Grandmother must have known that all along. And perhaps that long-gone sailor in the far remove.