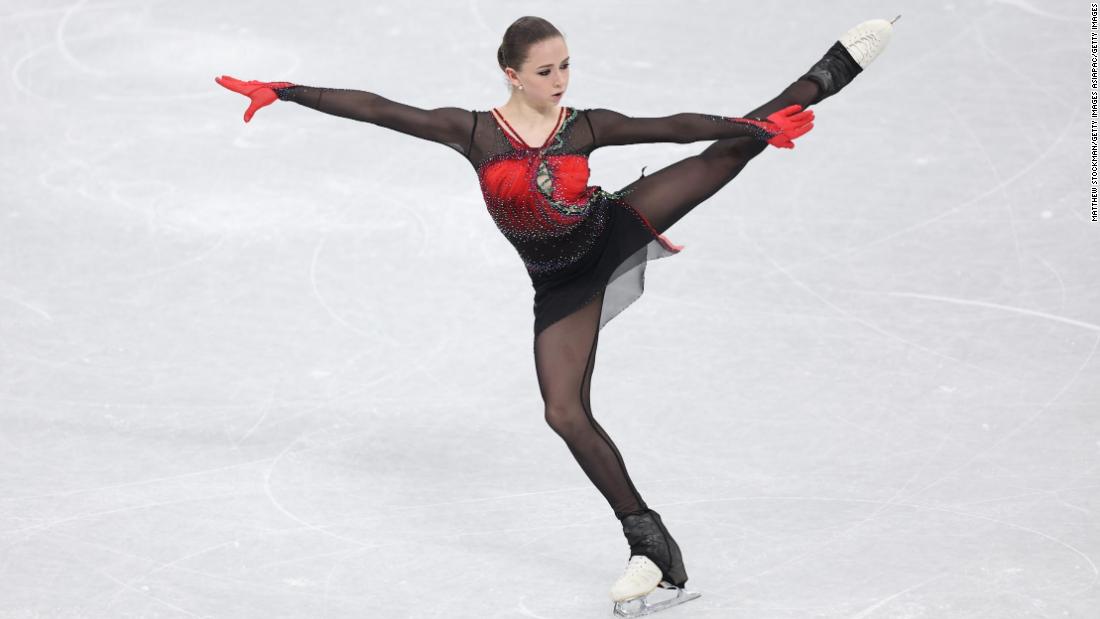 The Court of Arbitration for Sport (CAS) ruled Monday that Valieva could compete in the short program of the women’s single skating competition, an event that she’s a favorite to win.

The athlete — whose presence on ice has been described as “ethereal” by fans of the sport — plans to skate to the music “In Memoriam” by Kirill Richter and attempt a triple axel as well as a triple flip in her program.

On Monday, CAS upheld a decision by the Russian Anti-Doping Agency’s (RUSADA) agency to lift a provisional suspension against Valieva on February 9 that it had imposed against the skater just one day earlier.

CAS said in a statement it had decided Valieva should be allowed to compete due to “exceptional circumstances,” including specific provisions linked to her status as a “protected person” — because she is a minor — under the World Anti-Doping Code.

The clause allows “specific provisions for different standards of evidence and for lower sanctions.”

The CAS also noted Valieva did not test positive during the Winter Olympics. In making the decision, the panel considered “fundamental principles of fairness, proportionality, irreparable harm,” the statement said.

It concluded “that preventing the athlete from competing at the Olympic Games would cause her irreparable harm in these circumstances.”

The decision does not reflect whether Valieva did or did not violate anti-doping rules, but rather whether she should be allowed to continue to compete as further information is gathered.

The IOC executive board announced later Monday there would be no medal ceremonies for the completed team event or the women’s single skating competition, should Valieva place in the top three, until it was established whether the skater had violated anti-doping regulations.

“Only after due process has been followed can it be established whether Ms Valieva infringed the World Anti-Doping Code (WADC) and would have to be sanctioned,” the statement said.

“The IOC will, in consultation with the athletes and NOCs (National Olympic Committees) concerned, organise dignified medal ceremonies once the case of Ms Valieva has been concluded.”

The decision to allow Valieva to compete prompted swift backlash from the US and some sporting bodies but celebration from Russia.

Alexander Gorshkov, president of the Figure Skating Federation of Russia, called the decision “a celebration of common sense and justice,” according to state media RIA Novosti.

But, the head of the US Anti-Doping Agency (USADA) Travis Tygart said Russia had “hijacked the competition” and “stolen the moment from clean athletes.”

He said the decision should be respected but added that it was “rushed.”

Tygart said if it was later found that Valieva should not have competed, the verdict will “reveal what a farce the handling of the Russia state-sponsored doping system by the IOC has been over the last eight years.”

Sarah Hirshland, CEO, of the United States Olympic & Paralympic Committee (USOPC) said the group was “disappointed by the message this decision sends.”

“We know this case is not yet closed, and we call on everyone in the Olympic Movement to continue to fight for clean sport on behalf of athletes around the world,” she said in a statement.

Others were quick to point out Valieva’s vulnerability as a minor.

Global Athlete, a group that works for change in the sporting world, called for “immediate reform” to anti-doping systems.

“Doping and the trauma of a positive test pose grave physical and psychological risks to all athletes but especially to minors. It is unacceptable that these risks have been placed on a 15-year-old,” the athlete-led group said in a statement.

The World Anti-Doping Agency (WADA) and the IOC both said that further examination of the skater’s encourage will be undertaken.

“RUSADA (Russian Anti-Doping Agency) already indicated it had started that. We will ask our independent Intelligence and Investigations Dept to look into it as well,” WADA said in a statement to CNN on Sunday.

How the controversy unfolded

Valieva returned the positive test during the Russian Figure Skating Championships in Saint Petersburg on December 25.

But the results weren’t reported by a Swedish laboratory until February 8 — one day after the ROC team won gold in the event in Beijing, according to the International Testing Agency (ITA).

Valieva was immediately given a provisional suspension by RUSADA, which automatically prohibits athletes from participating in all sports.

The figure skater challenged the suspension on February 9 and, at a hearing that same day, RUSADA lifted the provisional ban — allowing her to continue competing at the Olympics, according to the ITA.

Responding to the controversy, the ROC on Friday said Valieva had “repeatedly passed doping tests” while already in Beijing, adding that it is taking measures to keep Valieva’s “honestly won” gold.

“The doping test of an athlete who tested positive does not apply to the period of the Olympic Games. At the same time, the athlete repeatedly passed doping tests before and after December 25, 2021, including while already in Beijing during the figure skating tournament. All the results are negative,” the ROC statement said.

Speaking to reporters Monday, CAS director general Matthieu Reeb also pointed to the “untimely notification” of the positive test results, which were returned well outside the typical one week or 10 day time frame, as another complicating factor in the case.

“The late notification is extremely unfortunate, as it affects not only the athlete, but also the organizers of the Olympic Games,” Reeb said.

He noted that CAS was not requested to rule on the merits of the case or the legal consequences related to the results of the team event, “as such issues will be examined in other proceedings.”