Ethical Today Ethical Today is your news, entertainment, lifestyle website.
Home Business Inside the Mattress Pickup and Resale Side Hustle 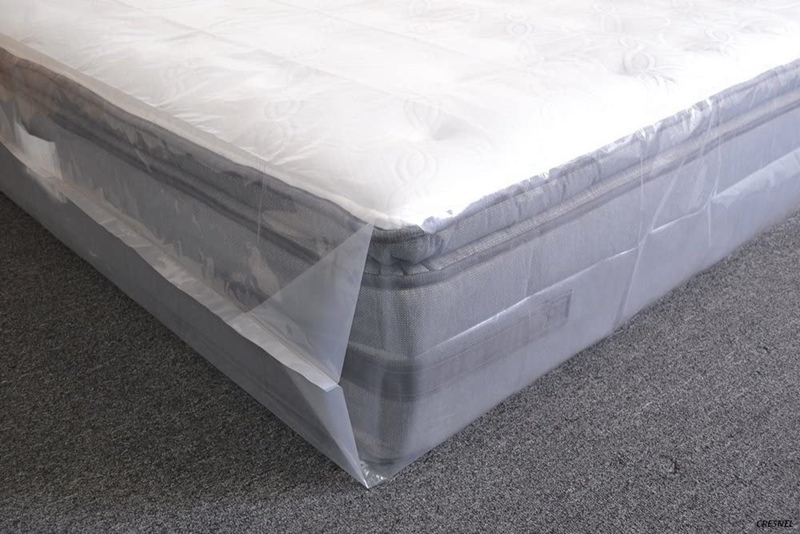 For the past couple years, I’ve seen a few people talking about their side hustle picking up “bed in a box” mattresses. They say it’s something you can do part time and the pay is great.

After that, though, the details become more and more scarce.

How does it all work? Where does the money come from? What’s the catch?

I was curious to learn a bit more, and found a unique mattress flipping side hustle made possible by the rise of direct-to-consumer mattress brands and a company called Sharetown.

In this post, I’ll breakdown how it all works and how much you can make as a Sharetown rep so you can decide if it’s a side hustle worth pursing.

Established in 2012, Sharetown is a leading provider of “reverse logistics” — ie. what happens when the buyer of an online mattress decides they don’t like it.

To overcome the objection of customers not wanting to spend $1,000+ on something so personal and subjective without ever feeling it in person, mattress manufacturers rely heavily on the “100-night-sleep-better-or-your-money-back-guarantee” (or similar).

This makes the purchase risk-free for the customer, but introduces a challenge for the brand.

How do they deal with those returns? The mattress that came neatly vacuum-sealed in a box isn’t going back in there, and it’s not like they can just re-sell it to another customer even if it did.

This is where Sharetown comes in. They partner with mattress brands* to handle the pickup and redistribution/donation/disposal of those mattresses when customers aren’t 100% satisfied.

Sharetown is consistently Habitat for Humanity’s largest donor of their chapter and also makes charitable contributions to hundreds of various charities across the nation. (When brands specify the return will be donated, or the item can’t be resold.)

Where the side hustle comes in is in the “redistribution” part. In other words, Sharetown reps make money re-selling these often gently-used mattresses on the secondary market.

Fun Fact: Per Consumer Reports, 7% of “bed in a box” mattresses end up getting returned. That’s roughly 3x the return rate at Mattress Firm, a brick-and-mortar mattress retailer.

How Much Can You Make as a Sharetown Rep?

I connected with Staci Aburto, a Sharetown rep in the Phoenix, Arizona area, who reported earning $3,000-$4,000 a month flipping furniture through Sharetown.

Staci and her husband — who she called “the muscle” of the operation — spend 6-10 hours a week on the business. That time is spent:

No matter how you slice it, that’s a pretty well-paying side hustle.

Staci described a natural “ebbs and flow” to the business. It tends to be quiet around the holidays, and tends to pick up after big retail sales pushes (as more people are making returns).

They’re able to fit their Sharetown side hustle into a couple evenings a week, and she made it sound like they can scale up or down their pickups as their schedule and work and parenting commitments allow.

On the Sharetown site, they highlight a handful of other reps earning anywhere from $800 to $3,800 a month. It’s also kind of cool because they show what vehicle they use and the typical volume of monthly pickups.

This type of reverse logistics business tends to grow in lockstep with the e-commerce industry it supports. That means the more populated the city, the more Sharetown reps that area can accommodate.

Per Staci, Sharetown wants to make sure it has adequate coverage for the return requests it receives, while still being careful not to oversaturate a market with reps.

She gave the example that in the Phoenix area, there are “at least 15” reps to cover a population of almost 5 million people.

The fastest way to find out if there’s room in your area is to fill in the 5-minute application.

Applying to be a Sharetown Rep

When you apply to become a rep, one of the first questions you’ll answer is your zip code. 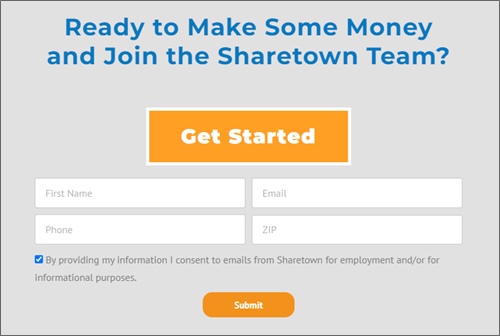 From there, you’ll be asked to fill in a more detailed application with information on your:

As a Sharetown rep, you’ll begin to get notified of or assigned pickups in your area. You’ll receive the location and customer’s contact information to coordinate timing for the pickup.

Once you have the item, you’ll either drop it off at the predetermined donation destination and get paid, or prep it for resale.

In the latter case, Sharetown reps resell the mattress on Facebook Marketplace or elsewhere, and send Sharetown payment for the inventory once the sale is complete.

(I like how they call it “reintroducing the mattress into the community” like it’s some kind of zoo animal returning to its natural habitat.)

Sharetown then sends a portion of the payment back to the manufacturer, and keeps the remainder for their own operations and profit. A rep’s profit comes from the markup between the cost they have to pay Sharetown and the ultimate resale price they can get.

For Staci and her husband, she said they like to average around $250 in profit per item.

A consistent stream of risk-free inventory is a reseller’s dream, and it seems like that’s what Sharetown provides.

Wait, Is It Legal to Sell a Used Mattress?

In most states, selling a used mattress is perfectly legal, especially by an individual (as opposed to a retailer) and especially when it’s not being advertised as new.

Nolah has a handy state-by-state guide so you can check the regulations and stipulations in your area.

Startup Costs: How Much Does it Cost to be a Sharetown Rep?

It’s free to become a Sharetown rep, but Stacy mentioned there are some nominal startup costs. In her case, she and her husband invested around $60 for equipment:

They already had a pickup truck and a place to store inventory (their garage).

She also noted that the company doesn’t reimburse you for gas or mileage, so be sure to track that on your own so you can deduct it come tax time. An app like Hurdlr can help automate that!

Do You Need a Truck to be a Sharetown Rep?

Access to a pickup truck, van, or large SUV is important for this side hustle. Many of the mattresses do fold in half to make transportation easier, but even then, you’ll probably only be able to fit one in the back of an SUV with the seats folded down.

The couple that picked up our Layla mattress had a Honda Pilot, but used it to pull a little flat trailer like this: 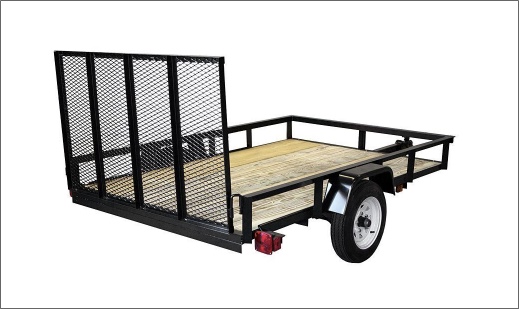 Since these are typically large bulky items, making sure you have a clean, dry place to store them while you wait for them to sell is a must. To keep expenses low, Staci and her husband began in their garage. This is a common strategy for new Sharetown reps and she said you can probably store 5-8 mattresses comfortably in a garage, leaned vertically against a wall.

After about a year, Staci said they invested in a storage unit to be able to expand their inventory. After all, the more items you can sell, the more profit you can make.

Occasionally, customers will want to come by to inspect the mattress or even test it out, at which point you can set it up for them on the floor for a quick demo.

Naturally, when prospective buyers see the rest of your inventory, it can lead to some interesting conversations — and potentially, additional sales. Staci mentioned one buyer of hers was a real estate investor furnishing a vacation rental, and ended up selling her multiple items and making a great contact for the future.

After coordinating the pickup and cleaning the item, your work is only half over — and you haven’t made any money yet.

Now it’s time to list the item on Facebook Marketplace, OfferUp, Craigslist, or other local marketplace and find a buyer.

Staci explained that Sharetown reps need to abide by certain minimum pricing guidelines for each item, set by the company in each geographic region. This prevents reps from undercutting each other in a rush to liquidate inventory.

You’ll also have access to your “buy price sheet” — the amount you’ll have to pay Sharetown after you sell the item. Since buyers on secondhand marketplaces tend to negotiate, it’s helpful to have that “floor” price on hand so you know the minimum amount you can accept.

Sharetown also provides some product photos you can use in your listings, but Staci noted that you’ll probably want to add your own photos as well.

In browsing my local Facebook Marketplace, I found a Helix mattress for sale from someone I’m guessing is a Sharetown rep: 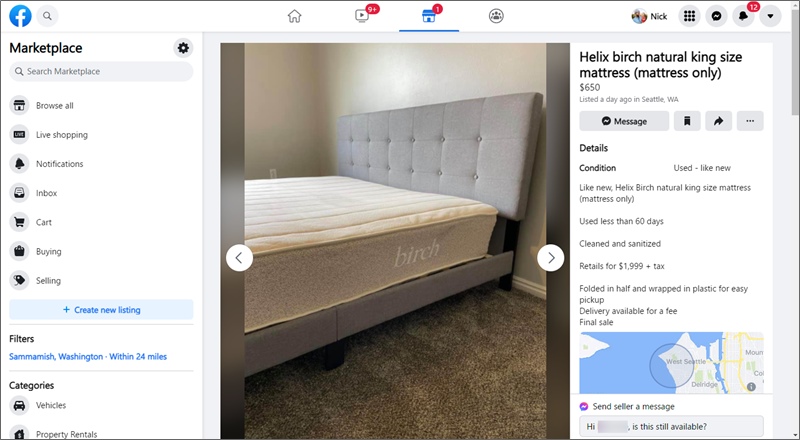 Their profile suggests they’ve sold several other mattresses recently, they offer delivery, and the listing has detailed information about the product. The listing also highlights the primary benefit for new customer: a huge savings off the retail price!

Staci also suggested making a note when you pick up the mattress of whether or not the home is smoke-free and/or pet-free. You can use those attributes as selling points in your ad.

What Happens When an Item Doesn’t Sell?

If you have an item that isn’t selling, Staci mentioned that manually deleting your listing and re-posting it seems to breathe some new life into it.

As a rep, you’re required to pay Sharetown your cost once a week for everything you sold. The profit margin above that cost is yours to keep.

For Staci, removing that upfront expense made it a side hustle worth pursuing. “I was skeptical coming into this,” she explained. “It’s not too good to be true. The benefit is you’re not forking out hundreds of dollars to buy bulk items, and then trying to make money off of it.”

From a financial standpoint, “It’s been a game changer for us,” she added.

Now the prospect of getting risk-free items to flip for a profit is pretty appealing. Sharetown is a “business in a box” for those in areas that need more reps and are willing to do the physical work required to pickup and resell the items.

Still, I want to put a couple other side hustles on your radar that might be worth exploring as well.

Buying low and selling high may be a natural side hustle to add on to your Sharetown sales. Side Hustle Show guest Stacy Gallego broke down how she was earning thousands of dollars a month flipping secondhand products like motorcycle sidecars, skateboards, and even Sleep Number Beds.

It’s a super-inspiring interview and showcases how there really is profit to be found just about everywhere.

The flexible schedule of a Sharetown rep is similar to that of a mobile notary. Mobile notary loan signing agents travel to borrower’s homes and walk them through their new mortgage documents.

This gig often pays $50-150 per appointment, with appointments often taking place in the evenings. (Banks like to lend to people who have jobs during the day!)

Some members of the Side Hustle Nation community have reported earning up to $8,000 a month in their mobile notary business.

And finally, if you like the thrill of making sales online but don’t want to have to leave your house, you should know about online arbitrage. In this business, you buy low from other websites, and sell high (usually) on Amazon.

I connected with Chris Grant on The Side Hustle Show, who broke down how this works and what it takes to get started. (And how he sells $75,000 a month worth of stuff online!)

Based on what I’ve learned so far, Sharetown appears to be a legit side hustle with real people making real money all over the country. Of course, like other businesses, the more effort you put into it, the better results you’re likely to see.

Click here to to learn more and apply to be a rep yourself.

But what do you think about the Sharetown mattress flipping side hustle? Let me know in the comments below!