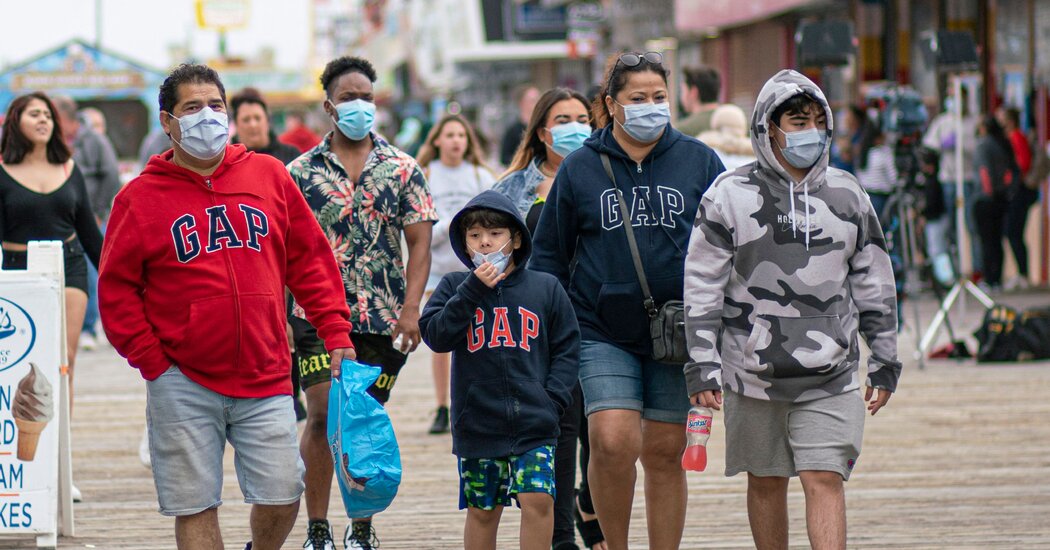 The governors of Maryland and New Jersey defended their moves to ease Covid restrictions, saying on Sunday that falling coronavirus cases in their states justified a change even as new cases and deaths remain fairly high in some regions of the United States.

“As best we can tell right now this thing is going from pandemic to endemic, and we feel it is the responsible step to take,” Gov. Phil Murphy of New Jersey said on CBS’s “Face the Nation,” referring to the stage when the virus will become a manageable part of daily life. He is one of several Democratic governors who announced plans to lift statewide mask mandates last week, as the highly transmissible Omicron variant loosens its grip on the United States.

According to many health experts, the pandemic’s next phase may depend on the emergence of new variants, vaccination rates and risk tolerance. Herd immunity to Covid, public health specialists say, is unlikely to be achieved. And scientists have cautioned that protection may wane over time, and future variants may be better able to sidestep our defenses.

Still, known coronavirus infections are falling across the United States, though case numbers nationwide have not dropped to pre-Omicron levels and remain high in states like Alaska, Mississippi and West Virginia. Hospitalizations and deaths are also on the decline, but remain elevated.

Governor Murphy’s optimistic tone echoed that of Larry Hogan, Maryland’s Republican governor, who has called on his state’s Board of Education to lift its school mask mandate. Governor Hogan removed Maryland’s state masking requirement last May, but the schools are governed independently. “I think it’s safe enough for our kids to just try to get back to normal,” he said on CNN’s “State of the Union.”

This week, the head of the Centers for Disease Control and Prevention, Dr. Rochelle P. Walensky, reiterated her agency’s position that masks should not be removed when gathering indoors. “We are not there yet,” she said at a White House briefing on Wednesday.

As cases drop and restrictions lift, Dr. Scott Gottlieb, the former head of the Food and Drug Administration, said he thought the country seemed to be shifting away from a period of collective actions to protect vulnerable groups, and toward one where individuals must protect themselves based on their own risk assessments.

“I think there’s portions of the population that are going to be in a very difficult spot right now because they remain vulnerable,” Dr. Gottlieb said on “Face the Nation.”

Young children, he said, are one of those groups, referring to the F.D.A.’s announcement on Friday to postpone its decision about whether to authorize Pfizer-BioNTech’s vaccine for children under 5 until more data becomes available. Studies so far have found that two doses are not sufficient to protect children ages 2 to 4, though in April the company expects to have data on the efficacy of a third dose.

Dr. Gottlieb, who serves on Pfizer’s board, said the latest delay, which affects nearly 18 million children and their families, was frustrating. But he said the F.D.A.’s decision was prudent. By waiting, “they’ll have a very firm picture of what level of effectiveness the vaccine is delivering,” he said. “That is important for patients and pediatricians to make fully informed decisions.”