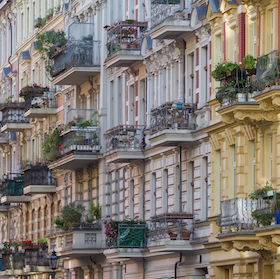 Everybody loved Berlin except for me and Emory. From my rented bed I could hear the others laughing in the streets. I’d pass the empty bottles on the curbs, lined up like tiny cities for the homeless to collect. Where New York had rooftops; Berlin had balconies, and everywhere I went I was sad and dumb and twenty-two—an age that pretends to matter when it doesn’t.

Emory and I didn’t like each other, but we didn’t have anyone else. We moved to Berlin on the same day in September, and a mutual friend insisted we connect.

We spent our evenings in the room she rented from an older, West-German woman who brought young men home and made Emory clean the sink with special powder. The water here is hard, she explained, good for the body but bad for everything else.

We googled it on Emory’s heirloom bed one Saturday night while her roommate loudly fucked a tattooed thirty-something in the shower. Water, we read, is the most controlled substance in the country.

Emory worked full-time and I lived off my father’s money but didn’t call him often. Mostly I was alone, strolling Karl-Marx Allee under the Zuckerbauten, their ceramic tiles like tabak-stained teeth. Emory was half-German and her being there felt easy. I was just some transplant who chased a boy.

Jan, he was called, was dark-complected, not too tall, with skinny brown eyes and a father who split right when the wall came down. We’d met the summer before, when I was studying something useless and he was clipping tickets at the Historisches Museum down the road.

We smoked a lot of weed those few warm months, thick moist buds that left a fruity film on my fingers. Jan had a friend who grew it out in Ahrensfelde, where the tram lines end and former communists take naps in garden sheds.

I remember getting high on a hill somewhere, surrounded by tall grass. Jan would guide me and I never knew where in Berlin I was. The sheen of sweat on the short bridge of his nose and faint freckles on the apples of his cheeks: I ached to pry open his pupils and disappear inside them. I told him he was hot—a word that bore no weight. He cast a wide-toothed smile and said I must have a tumor in my brain.

In August I had to leave. Jan took me to Tegel airport and told me, “It would be nice if you came back.”

He shed one tear outside the gate, and I remember thinking it belonged in a museum.

So one year later I returned—for Jan at first, since I hadn’t yet met Emory.

He got me at the airport and drove me to the small apartment he lived in with his mother. Sabine, she was called, a former dancer with the then-East-German Company.

It was warm that morning, as we sat on the balcony overlooking Hönow. I stepped inside to drink a glass of water from the tap.

“Ach nein,” Sabine scolded when she saw. I looked around, not sure what I’d done wrong. “Don’t drink that. It’s full of lead,” she said, remembering how things were.

She dragged a crate of plastic bottles from beside the compost bin and passed me one. I felt bad about the turtles, but she couldn’t let it be.

Sabine had pin-up photos of herself in every room. They were placed proudly in the open—beside a commemorative krug, on a kitschy doily—I did my Yankee best not to see them.

“You have a lovely home,” I said in clumsy German, scanning past the 8×10 of her in cut-out latex.

“I would die” was Emory’s reaction when I met her some weeks later. “Your boyfriend’s mother naked?”

Her roommate’s headboard thumped and I thought she sounded more American than me.

Jan worked early shifts, and often I would wake up on his bed in the spare room and he’d be gone. Sabine would be singing in the kitchen. I’d get up and fluff the pillows and was always fully dressed before I joined her.

She’d be sitting on her balcony smoking a Gauloise and would greet me with her small dark eyes and clipped manner of talking—the Berlin dialect gradually dying out.

One morning she fed me herring salad so acidic it puckered up my cheeks. Still I ate every bite, laboring under my East Coast politeness.

Though at first I found her hard to read, Sabine warmed to me. With her son it was the opposite. He’d liked me that summer when I was fresh and foreign, but more and more I woke up without him by my side.

By winter, it was just me and Sabine, drinking coffee made with bottled water and feeling left behind.

“Everyone loves Berlin,” Emory grumbled on my last visit. “They come in summer and think it stays that way forever.”

Our elbows touched where we sat surrounded by the candles on her balcony. She lives alone, and we’ve come to love each other now that we have options.

“If you commit,” she said, “you find out winter here is endless and it makes you want to die.”

I rolled a cigarette on my thigh. Below, a car blasted warbling Arab notes.

“I liked Berlin in winter best,” I said.

Emory raised an eyebrow in my direction. “And yet you only visit me in summer.”

At first I liked Sabine for her son, but now I love her more than I loved him. We get Kaffee und Kuchen when I come through, and neither one of us has heard from him in years.

I could never blame that city for my heartbreak; my heart was already inflamed when I arrived. I thought that it would burst without attention, like an appendix unexcised beneath the ribs. I learned to hand-roll cigarettes and smoked them on gray corners in the bitter winter cold. I enjoyed how my hands lost color and the way the buildings matched the sky.

I gave up on Berlin, moved back home to New York.

Here no one smokes, and from the rooftop of my walkup, the sky always looks too blue. In my closet is a pillow from Jan’s old baby bed, with yellow seams Sabine sewed with her own hands. I call Emory when I have nothing else to do.

Isabelle Burden is a writer and translator from German with an MFA from Columbia University. Her work has been previously published in Hanging Loose Magazine, and she is currently at work on her first novel. Find her at www.isabelleburden.com.