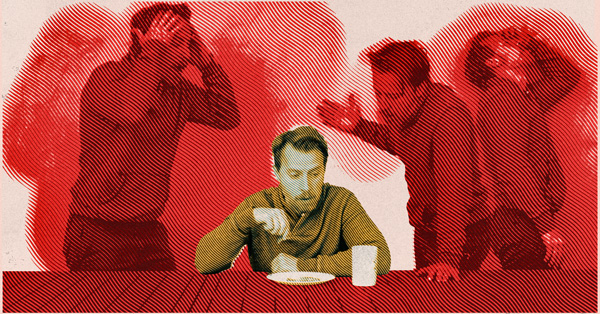 Discipline is the key to all hard things – but it is so much more than just “forcing yourself to do things you don’t feel like.”

It was 2 am and the freezing, howling wind hit my face without mercy, slowly turning my beard into a forest of icicles. The words of Ronnie Coleman, eight-time Mr. Olympia and one of the greatest bodybuilders to ever live, echoed in my head. Ain’t nothing to it but to do it.

As I walked through the sleeping city and under snow-covered roofs, I realized a German winter can be both beautiful and freezing your balls off, but it was too late to complain. I told myself I’d hit the gym today, so I couldn’t go to bed without swinging a few barbells around.

Iron discipline isn’t comfortable, but it’s worth it. Trudging through mountains of snow while everyone is sleeping in their warm, cozy bed isn’t fun, but it’s better than waking up with regrets and looking like an inflated marshmallow.

Think of the rich entrepreneur, the jacked fitness model, or the Casanova who’s admired and chased by girls. They all kept pushing when things got hard. That’s why discipline is key to whatever you want to achieve in life.

“Discipline is the bridge between goals and accomplishment.” – Jim Rohn

But for most men, the reality looks different. Skipped workouts. Sleeping in. Living a life so far below their potential they can tickle a submarine’s belly.

If this is you, it’s not because you “haven’t got what it takes” – it’s because you make discipline much harder than it needs to be.

Take it from someone who’s worked out six days a week and starved himself for a bodybuilding competition: Building discipline often means pain and struggle, but it shouldn’t make you miserable. If you do it right, you’ll even enjoy it.

Most men think discipline is all about seeking out pain and pushing through it – but it’s much simpler than that.

The problem is most men try too hard. They want to hit the gym six times a week, work on their side hustle every day for hours, and change everything at once – new year, new me. That’s the path to failure, burnout, and shame, but not discipline.

Instead, take the advice of James Clear, author of #1 NYT bestseller Atomic Habits and GOAT of discipline and consistency: Start small.

The goal isn’t to become disciplined overnight. It’s to change your identity until you view yourself no longer as the guy who tries and fails, but the guy who does what he said he’s going to do. Prove it to yourself that you are disciplined, and you will be.

Build the right habits because with every successful repetition, they prove you are that kind of person. Here are my best tips to do that, distilled from over ten years of personal experience and coaching many a client.

Every Day, You Choose Between Two Futures – So Choose Wisely

“To carry a positive action, we must develop a positive vision.” – Dalai Lama

It’s amazing how much the human body and mind can achieve if there’s a compelling reason.

Elon Musk has put himself through countless stretches, 100+ hour weeks, and numerous setbacks – only to come back relentlessly, again and again. One of his secrets is a big, inspiring vision, changing the world of money transfers through Paypal, the world of automobiles through Tesla, or the prospect of humanity becoming an interplanetary species through SpaceX.

If you want to build discipline, make sure you know exactly what you build it for.

Most men forget the consequences of their actions are often more far-reaching than they think.

Choosing between the gym and skipping a workout goes much further than just six-pack abs. You choose whether you live to old age, play with your kids without running out of breath, and enjoy life to the fullest in a healthy body – or not. The same goes for advancing your career, staying off the beer, or blocking your browser’s access to OnlyFans.

Unfortunately, your ego is good at denying cold, hard truths and making excuses.

“It was a tough day, I deserve some rest.”

Remind yourself of your vision and the future you choose every day. I do this by reviewing my vision board with images of all the things I want to achieve – being free, financial independence, living next to the beach. That way, I remember what’s at stake with the choices I make – every day.

If you’re serious about becoming more disciplined, ask yourself why, again and again. Write about the two paths you can take – the one of instant gratification and the one of denying it – and their consequences. Review them every morning.

Once you do, you’ll realize what future you choose, every day.

Use the Three Division Rule

The reason why most men eventually give up discipline is simple: They take on too much.

It’s like going to a buffet hungry and loading your plate like a transoceanic container ship – while you’re hungry for results (and pancakes) in the beginning, it quickly becomes too much. Progress stalls, misery replaces winning feelings. You give up, first on your discipline and then on yourself.

You can’t beat the final boss of a video game without leveling up your character first, so don’t make discipline harder than it already is.

Instead, try the technique I use with my coaching clients. Split your desired actions into three divisions – good, better, and great. Doing one exercise is good, hitting the weights for half an hour is better, doing a full-blown workout is great.

Here’s the important part: Start with the smallest division and practice it until it becomes second nature. Then, advance to the next level and fight tooth and nail to not fall back.

Progress equals happiness, so don’t deprive yourself of that feeling – it’s better to build your discipline slowly than to lose it quickly.

Former Navy Seal Jocko Willink wakes up at 4:30 am every day and hits the gym. But his secret isn’t just his sheer willpower.

Instead, Jocko makes it easier for himself by preparing his workout clothes the night before. Like Jocko, you’re not only a product of your parents’ horizontal tango but also of your environment. This influences you much more than you think.

If you’re on a diet but your cupboards are stuffed with sweets like a Turkey with stuffing on Thanksgiving, it requires a ton of willpower to keep your hands out of the cookie jar.

The same goes for party animal friends, a comfy couch in front of a flat-screen TV, and a bunch of social media apps on your phone. They are distractions and staying away from them requires much more discipline than you have in the beginning.

Make your environment work for you, instead of against you.

The possibilities are endless, but the principle stays the same: Make it easy to follow through on your commitments and hard to break them.

You Aren’t Born With Discipline, but You Can Choose To Live With It

True discipline isn’t about forcing yourself into what you don’t enjoy.

It’s about delaying instant gratification in favor of long-term benefit often enough until this behavior becomes part of your identity and spills over into other areas of your life.

This will give you more confidence, propel you towards your goals, and help you become proud of yourself instead of filled with regrets.

Nobody is born with discipline – but you can start building it today.

Building discipline is the tough challenge of mastering your own desires. But as Plato said:

“For a man to conquer himself is the first and noblest of all victories.”