Ethical Today Ethical Today is your news, entertainment, lifestyle website.
Home Future How not to write about the costs of higher ed: another example 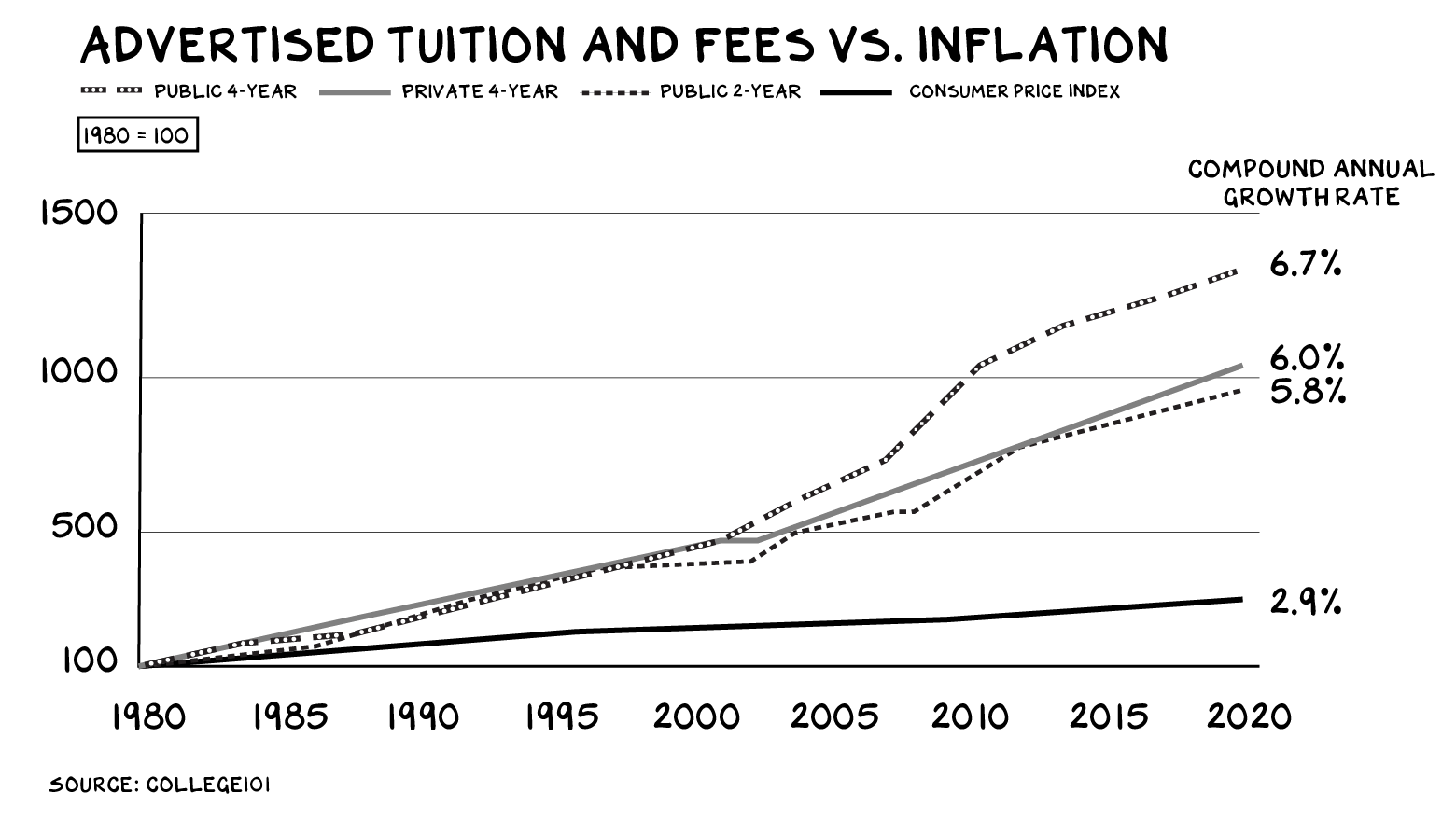 The economics of higher ed are notoriously complicated and even shambolic.  Approaching this Byzantine system requires a good amount of research and care just to get started.  Which means it’s very easy to write badly about the topic.

Today’s case in point comes from Scott Galloway.  I’d like to take it apart not to criticize the guy himself (no malice here, to pick up on his tagline), but to illustrate some common mistakes in his article which readers can spot and avoid.  I take my job as a futurist to mean (among other things) that research about the present and recent history should be excellent, in order to improve forecasting. Let’s see about improving things.

The piece is a Medium article titled “Why the Cost of Higher Education Has Spiraled Out of Control” and it makes some good points.  Galloway is right to repeat the common wisdom that published academic tuition has soared for some institutions over the past two generations.  He’s right to echo many people who see the nearly $2 trillion in student debt as a disaster.  Yes, accreditation is a powerful force.  Calling out senior administration compensation as excessive is a popular charge, as is arguing for taxing excessive endowments. And I’m glad to see a professor from an elite institution complain that being exclusive runs counter to the democratic promise of access.

Yet the piece makes a series of mistakes that too many others fall prey to.

Confusing a handful of universities for all of higher ed. There are about 4,000 American post-secondary institutions, and they appear in a wide range of forms: public and private, liberal arts and community colleges, arts-centered and vocational, huge and tiny, to name a few.  This diversity must be hard to grapple with, because writers so often like to pick on one slice of it, then generalize to the rest therefrom.

“Why the Cost…” has many examples.  The title calls out higher education as a whole, but the first paragraph immediately slices it down to state-funded schools: “undergraduate tuition has risen nearly three times as fast: 6.7% a year at public colleges…”  A few paragraphs later the author explains all of rising tuition by analyzing “[o]ur best universities” and “our great public universities,” and “the top 200 schools.”  Why does this matter?  Because different sectors, systems, and individual campuses have different pricing structures.  And because community colleges – the largest slice of American higher ed – have far, far lower published tuition that most other institutions, which makes the article’s argument at best an overreach.

To be fair, the article offers this graph of prices, which displays several tracks, although the article on picks on one:

And at the article’s end Galloway changes tack and addresses other schools, citing “local public institutions, including two-year schools, that charge modest tuition…”  It’s too late in the piece, but welcome.

Missing tuition discounting. Yes, the published tuition rates have increased.  However, a good number of students and families don’t actually pay those prices.  They pay less, even a lot less.  This is because colleges and universities use various tools to cut those prices for certain students.  Scholarships, grants, and other mechanisms let campuses charge less.

To recap what I and others have been saying for a while: tuition discounting has been going on for decades and is well known to everyone who looks at college finances seriously.  In fact, it’s been increasing drastically since 2000.  The median discount for first-year students is around one half – that is, if a school publishes tuition of $60,000, its median student pays $30,000.  Here’s a recent finding from the profession group devoted to campus business and finance officers:

Why is this?  Partly it’s to attract certain individual students or types of students.  Tuition discounting makes an institution more appealing to, say, sports stars or underrepresented minorities. Another reason is to respond to escalating income and wealth inequality. If one part of American society soars in wealth, a college or university can soak them for full price. Then that subvents those on lower economic levels.  I’ve heard this current steep tuition discounting practice described as a means test, and that’s not a bad analogy.

So yes, published tuition has risen. But what people actually paid – there, the picture is quite different.

Not seeing the actual enrollment picture. Galloway’s piece makes a different mistake, one that’s very popular to commit. “Kids are still getting into college (total enrollment has kept pace with the growth in graduating seniors)…” This assumes college students are recent high school graduates. Such a view contains some truth – some people do jump from high school to higher ed in a few months – but misses the large number of adult learners attending college.  Depending on one’s data, this can be one quarter or one third of all enrolled students.

Also on the enrollment side of things, that quote seems to say that total enrollment is rising.  As readers of this blog and my most recent book, Academia Next, know, the opposite is true.  American higher ed student numbers peaked in 2012 and have declined every year since.

Confusing goods and services. A very popular argument compares published tuition to well known commodities, like tv sets. Galloway leads off by looking at the price of gas.

Why is this a problem?  Because higher education as an economic function offered to students is a service, not a good.  Services behave differently in the market, especially services famously resistant to the efficiency improvements which drop the price of goods.  Moreover, the market often prices services to reflect the credentials of who provides them, and higher ed is very well credentialed.  I don’t just mean faculty, but also staff, who increasingly work with graduate credentials.

Consider this graph from Marc Perry:

Note how all of the blue items (decreasing prices) are goods, like toys.  Then see how many of the red ones (rising prices) are services: health care, nursing, and tuition.

(Three quick caveats: first, remember what I said above about actual tuition after discounts. Second, some goods increased, and we might be rightly angry that they have done so. Third, I’ve heard various critiques of this chart’s details; I’m not sure if they are correct, but the broad curves seem pretty convincing.)

If we talk about higher ed as a service sector, then the conversation changes.  We can compare it to, say, health care or law to see how those fields’ prices have changed, and look for any lessons to apply or ideas to be inspired by.

Not engaging other explanations for rising tuition An essential part of academic writing involves considering previous research into one’s topic.  I know that Medium pieces are not scholarly papers, but even there it pays to address well known arguments in the space, which Galloway’s article avoids.

For example, it’s pretty widely understood that American states gradually reduced per-student funding to their public universities since circa 1980.  There are several reasons for this, and defunding takes various forms, yet the overall picture is clear. Without going into too much detail, the argument goes that losing state money while educating more students (until circa 2012) meant state colleges and universities turned to student fees to make up the difference.  Hence the (published) tuition takeoff. I’d like to hear Galloway’s take on this.  Would he call for states to reverse course and increase support?

Another argument is the famous “amenities arms race,” whereby colleges and universities spend themselves mad by building up elaborate residence halls, climbing walls, wellness centers, lazy rivers, gourmet dining services, etc. Personally, I find this overstated, especially as the main chunk of campus budgets go to personnel compensation, but it’s a popular explanation and worth addressing.  Should colleges withdraw from the race?

Personally, I’m persuaded by Archibald and Feldman’s argument that higher ed’s published prices are expensive because we have a lot of highly credentialed professionals.  More staff and senior leaders have more degrees, which we tend to reward with higher compensation.  We insist that full time faculty should have the highest degree possible, the PhD. Now, this doesn’t account for the humanitarian disaster which is the adjunctification of the professoriate, where we are happy to pay people with advanced degrees poverty wages (and wages only, no other benefits), which is a weakness.  I’m also persuaded by the importance of state defunding.  And I think we should also bear in mind rapidly rising medical costs for full time staff and some students (again, not for adjuncts). (I do plan on writing this up at some point.)

There are some other problems in the Medium piece which are not quite so evident elsewhere.  In the article and elsewhere Galloway calls for a massive increase in enrollment, but this runs smack into the reality of a decade’s decline in students taking classes.  Similarly, his call for starting up a bunch of new schools falls short on that issue (why make new institutions when the present ones are seeing their market fade?). He needs to address this.  Also, I’m not sure what “putting schools on the hook for a portion of the bad debt” would look like – ISAs? – and the article doesn’t elaborate.

Yet the key thing for me is not these local issues, but how “Why the Cost of Higher Education Has Spiraled Out of Control” embodies so many popular mistakes.  Focusing on published tuition instead of the discounting system, overemphasizing parts of the whole ecosystem, comparing higher ed to the wrong economic category, and not engaging with the actual conversation around academic economics…  we would all do well to avoid these. Higher education needs better discourse.