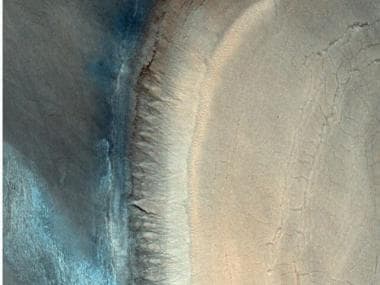 The European Space Agency (ESA) recently shared unbelievable photos of a crater on Mars on their official Instagram page. ESA is known to often share such mesmerising photos on its handle.

This time, the agency gave people a peek into an ice-rich impact crater on Mars. The picture was captured on 13 June last year in the vast northern plains of Acidalia Planitia.

In the post shared, ESA mentioned that the crater could easily be mistaken for a tree stump but was in fact a birds-eye view into an ice-rich impact crater on the red planet. The crater’s interior is filled with water-ice rich deposits. “This crater got excited with its rings”, read the caption of ESA’s Instagram post.

It is thought that the deposits were of a time when the red planet’s spin axis allowed water-ice deposits to form at lower latitudes, unlike it does today. Mars also tilts just like the Earth and its tilt gives rise to seasons too. However, Mars has experienced dramatic change in its tilt over a long period of time.

Furthermore, ESA revealed that the crater deposits found on Mars have quasi-circular and polygonal patterns of fracture which reveal details of the red planet’s history. The feature of fractured patterns is said to have been produced due to seasonal changes in temperature which lead to expansion and contraction of ice-rich material.

Take a look at the incredible images here:

These images from ESA were shared as part of the European-led ExoMars programme. European Space Agency and Russian space agency Roscosmos collaborated to send a spacecraft called Trace Gas Orbiter (TGO) to Mars in 2016 and began its full science mission in 2018. The ExoMars Trace Gas Orbiter mission aims to understand the presence of methane and other atmospheric gases that could be present on Mars and may be an evidence for possible biological or geological activity.

TGO is returning spectacular images from the red planet and is also mapping the planet’s surface for water-rich locations. The ExoMars mission also aims at understanding the history of water on Mars. Data provided through the ongoing mission will further help in the second ExoMars mission.

After the post was shared on social media, internet users were amazed by the spectacular pictures. The post gained nearly 17,740 likes on Instagram and prompted a number of comments from excited users.

An Instagram user wrote, “I love you European Space Agency”, while another loved the images so much that they put up a request to download them by writing, “Can we have it full resolution to download, please?”.

What are your thoughts on ESA’s incredible pictures from Mars?