Ethical Today Ethical Today is your news, entertainment, lifestyle website.
Home News Can they keep the lights on? Energy prices rise across Europe. 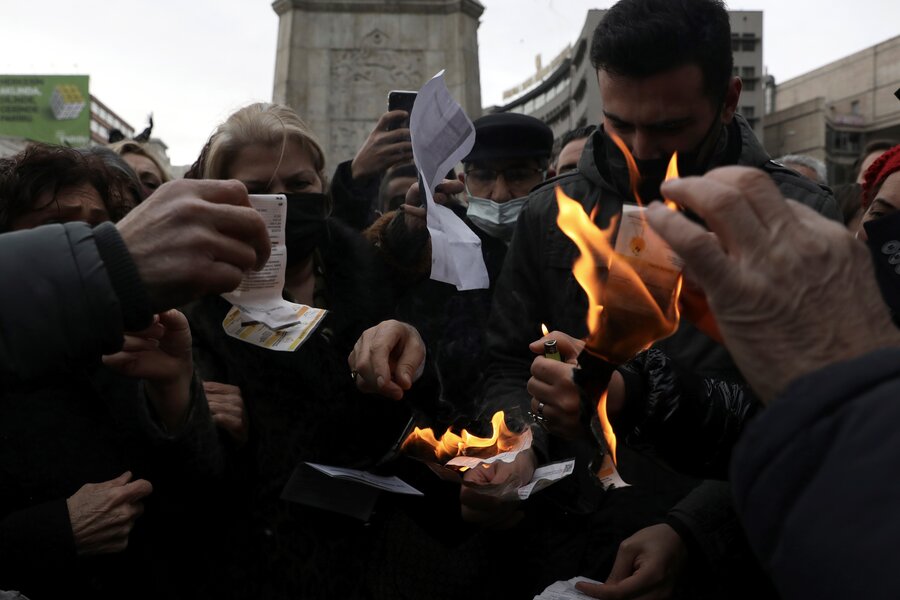 Mehmet Bogday says his jaw dropped when he saw his electricity bill – it was higher than the rent he pays for his Istanbul restaurant selling traditional Turkish wraps, and more than double what he paid a month ago.

Spiking energy prices are raising utility bills from Poland to the United Kingdom, leaving people struggling to make ends meet and small businesses uncertain about how much longer they can stay afloat. In response, governments across Europe are rushing to pass aid to ease the hit as energy prices drive a record rise in inflation.

Nowhere is that squeeze felt more acutely than in Turkey, where inflation has soared to nearly 50% and exorbitant electricity bills are stirring protests and fears about how small businesses, like Mr. Bogday’s restaurant, can survive.

Protests over electricity price hikes broke out across Turkey this week, including some where police fired tear gas to disperse crowds. People are posting their electricity bills on social media to show how costs are untenable. Shopkeepers are displaying notices decrying high bills on shop windows, while others have gathered outside electric companies and set their bills on fire.

Like the rest of Europe, electricity generation in Turkey requires energy sources that have surged in price, including natural gas, whose supply is low. A huge drop in the value of Turkey’s currency is driving the price spike in imported gas.

As Europe’s energy demand roared back from the depths of the coronavirus pandemic, it ran up against gas reserves sapped by a cold winter last year, a lack of renewable energy generation over the summer, and Russia not selling as much gas as usual to Europe.

Utilities are passing the costs along to customers, and people are getting hit twice: with higher bills at home and rising prices from businesses also paying more for energy.

It’s led to a cost-of-living crisis in some places, but especially in Turkey, where households and businesses were already reeling from eye-watering inflation and a currency that lost some 44% of its value last year, eating away savings and making it difficult to buy even basics like food. Authorities then raised electricity tariffs on Jan. 1, spiking prices by 50% for many people and as much as 127% for businesses and high-consumption households.

The leader of Turkey’s main opposition party this week joined a torrent of demands to withdraw the price hikes, saying he would not pay his electricity bill until the tariffs are lowered. Kemal Kilicdaroglu also called for reducing taxes on electricity rates.

Faced with mounting criticism, President Recep Tayyip Erdogan made changes this month so the price rises kick in when households use more energy, but it’s failed to provide relief. With price hikes threatening to hurt Mr. Erdogan ahead of elections next year, his administration has said it’s working on a possible readjustment or other measures to help people.

It’s something that governments through Europe are doing as rising utility costs draw widespread outcry.

In Britain, energy prices are set to go up by a record 54% – some 700 pounds ($940) per year – starting in April. The government says customers will get a discount on their bills to be paid back in small installments over the next few years, and most also will get money off another local tax. In total, the government said most people will get about half of the extra cost shaved off.

Likewise, Italian households are bracing for a record 55% increase in electricity and 42% in gas in coming weeks, energy regulators say.

To draw attention to the issue, mayors plunged the historic city halls of Rome and Florence into darkness Thursday night. The Italian mayors’ association said the government’s response so far has been insufficient to help cities confront hundreds of millions in additional energy costs, making them choose between balancing budgets or cutting services.

Premier Mario Draghi this week said Italy’s government was determined to draw up broad measures soon that will provide relief to families and businesses.

Polish regulators approved energy prices going up by 37% this year, pinching bakeries and other businesses to the point many had to close.

The right-wing government temporarily lowered taxes on electricity, gas, engine fuels, some food staples, and fertilizer. That’s expected to cut energy costs for a family of four by some 120 zlotys ($30) this year. The government also is introducing a bonus to households, ranging from 20 to 1,450 zlotys ($5 to $364) annually, depending on income.

Businesses say it’s not enough to balance their increased costs.

A majority of left-leaning lawmakers in Denmark agreed Friday to spend 1 billion kroner ($153 million) for a temporary program to help the most affected households cope with high electricity bills. Roughly 320,000 households in Denmark will be eligible for 3,750 kroner ($576).

In Turkey, energy woes are aggravated by the president’s policies. Mr. Erdogan has shunned conventional economic thinking and pressured the central bank to lower interest rates despite inflation at a 20-year high, further pushing up prices.

“It has been a heavy bill, we are aware of this,” he said, adding that the government was working to bring down inflation.

Kazim Iscen, a painter and decorator in Ankara, said he already has fallen behind on his utility costs and would not be able to pay his electricity bill, which came in “two or three times higher” this month. “I call on the government to have mercy on us,” he said.

Cengiz Sur, owner of a bar and restaurant in Istanbul, said he has been unplugging refrigerators and heaters and turning off lights after his power bill this month surpassed his rent.

“We’ve forgotten about rent and are now trying to figure out how to deal with our electricity bills,” he said.

Bendevi Palandoken, head of the Turkey Tradesmen and Artisans Confederation, warned that many businesses will shut down unless the price hikes are withdrawn and special tariffs are set to help small businesses.

“I think there will be some retreat from the price hikes,” said economist Ozlem Derici Sengul, founder of the Istanbul-based Spinn Consultancy. “I think that to curb the public tension, we may see some action from” government officials.

This story was reported by The Associated Press. Suzan Fraser reported from Ankara. Burhan Ozbilici in Ankara; Sylvia Hui in London; Monika Scislowska in Warsaw, Poland; Colleen Barry in Milan; and Joseph Wilson in Barcelona, Spain; and Karel Janicek in Prague contributed.