Ethical Today Ethical Today is your news, entertainment, lifestyle website.
Home Technology “An indoor garden helped us through the darkest days of Covid” 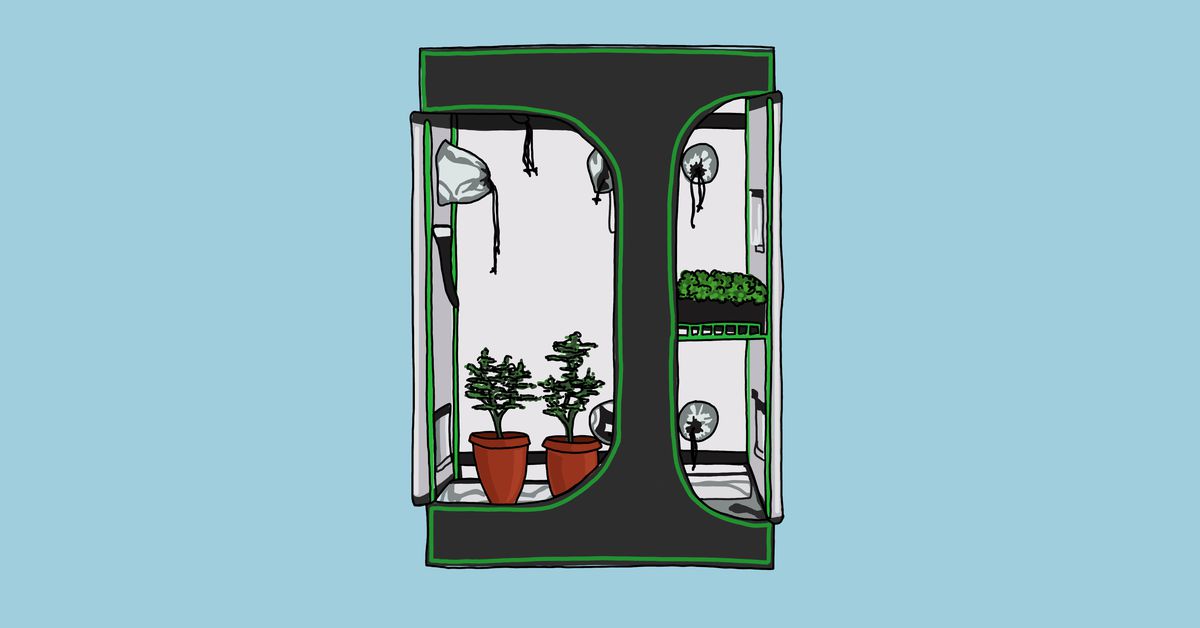 Bobby and I sat huddled together in the closet, my head on his shoulder. The warm glow of the grow light washed over us, making us sleepy.

“… And when I’m done with residency,” he said, “we can get some land and start to grow our own food together. That’s why we’re practicing now.”

“I can’t wait for then,” I sighed, looking at the tiny furls of radish seedlings coming out of the soil. It seemed like it might never happen, the way things were, but I was content to dream about it.

I had come a long way since the black canvas tent had arrived a few months prior. When my partner told me he wanted to start an indoor garden in our two-bedroom apartment (which we shared with his roommate), my first reaction was one of dread and anxiety.

“Where is it going to go?” I had asked as he unpacked the tent in our living room.

“Can we really afford this?” I griped as I tallied up the costs of the $300 grow light, the $90 fan to reduce humidity, the $100 of seedlings in total, and the varying nutrients for another $150.

“It seems like something with a lot of hidden costs,” I said, my eyes darting from item to item.

Throughout the strange spring of 2020, my and Bobby’s relationship had progressed very quickly. We’d had one date before lockdowns were initiated, and, as his roommate would later point out, I had essentially moved in right afterward. There was a sense of wanting to do something worthwhile with the time off; I had known him as a friend since high school, and felt incredibly comfortable with him right away. We both felt like we had met our match and could finally begin building as part of a unit. It was an insane way to start off a relationship, but there we were.

With him in his last year of medical residency and me as a new teacher, neither of us had much time to ourselves prior to the pandemic bringing everything in our lives to a screeching halt. I was sent home from work the first week in March and wanted to spend my new free time with Bobby at his place, which quickly became ours. (His roommate started spending more time elsewhere.)

Cooped up together at home, we started to fall in love, and we also got Covid. Bitter, restless, and uneasy, we showed each other our favorite movies, songs, and books. We taught each other all the special and secret things we knew. We cooked meals together and started to talk about an ideal life: the life we had always wanted to lead but were too busy getting by to really think about.

We had both always been extremely passionate (albeit in an armchair way) about self-reliance, sustainability, and homesteading. Bobby came at it from the perspective of a biologist who was fatigued from studying the human body and its systems for years. I came at it from the perspective of a historian having studied American environmental history. Like many others, when the pandemic hit and our schedules cleared, we began looking around for a healthy outlet to turn to, and a possible “solution” to the problems we faced. We did not like being dependent on whatever food was available at the crowded grocery store, full of other people. We did not like feeling stuck inside our apartment with nothing growing around us. We felt depressed, and tied to our jobs and routines.

We cooked meals together and started to talk about an ideal life: the life we had always wanted to lead but were too busy getting by to really think about

Bobby proposed to me on my birthday after only three months of dating. We both felt anxiously certain the world might be ending, and wanted to express our commitment to each other. Many of our friends and family were a bit shocked, but to us, it felt right. Soon after, he had to return to a more normal, hectic schedule at the hospital. Our magic moment started to fade a bit, and reality set in.

Bobby led the charge to turn our vague hopes and dreams into a reality, talking more seriously about purchasing a 4-by-2-by-5-foot grow tent. The vision was to start experimenting with different types of seedlings to learn about a variety of fruits, vegetables, and herbs. I, on the other hand, was perfectly content staying in the dreaming phase, having only spent money on rent, food, and bills for years. We had never had a conversation about how we wanted to spend our money, let alone how we’d go about combining finances. I had been an under-earner for years working in education, and he had yet to see any significant financial gains as he had not completed his medical training (though he still made twice as much as I did).

At first, the garden was “his” thing. It seemed like a fun idea, but as something to actually invest our money in, I was more unsure. I am an impulsive spender, so planning a larger purchase was completely alien to me, especially when another person’s input was involved. Part of me thought the idea would just fade away, and just be one of those things people talk about when they get down. I was so used to running out of money toward the end of the month, or a surprise expense derailing my budget, that I simply didn’t see how we would make it fit long term.

However, when the temperatures began to drop and the cases started to climb, Bobby’s and my anxiety got even worse. He showed me how hard he was working as a physician, and his need to justify some of that hard, dangerous work with some purchases that enriched our future. I could see he really needed this outlet and, out of love for him, I agreed to the purchase.

After bickering about where to put the tent, Bobby finally set it up in our bedroom walk-in closet. I was extremely uncomfortable with the idea of there being soil, dirt, and bugs in my closet, so I moved all of our clothes into our bedroom and put them in piles on the floor, where they would remain for the next six months. This was happening, whether I was fully on board or not.

Still, I could already see the positive effect it was having on Bobby, and in turn on me. After a long and exhausting shift at the hospital, Bobby would come home, tired and defeated, and slink into the closet to gaze at our first seedlings: carrots, lettuce, and radishes. I would reluctantly join him at his urging, as my own depression set in with the school year beginning like no other ever had. I wanted to sit on the couch and wallow in my own misery, but he coaxed me into the closet time and time again.

Our seemingly small purchase began to bring together many fractured pieces of our lives, and in a way that made sustainable sense

During those dark, cold months, we struggled emotionally and financially. When I received some difficult news about a family member’s health, coupled with the stress of being in a public school environment, I made the difficult decision, with Bobby’s support, to leave my job at the middle school and focus on my own health. Suddenly, we were down to one income. We now had an indoor garden to maintain and little room for error in our budget.

As the meat and vegetables dwindled at the local Market Basket, we began, more and more, to see our new hobby as a lifestyle and as a set of solutions. We searched for a style of producing food that was best for the environment and for our needs, and found that in permaculture and food forestry. These methods of agriculture are different from simply digging and planting your crops in a row. Instead, the aim is to create a food source that functions much like a wild forest would. Instead of heavily manipulating or controlling your garden (think pesticides), you let nature do what it does best (like introducing ladybugs to eat unwanted pests). Our seemingly small purchase began to bring together many fractured pieces of our lives, and in a way that made sustainable sense.

We still struggled financially. For several months we came up short on our bills, eating rice with vegetables for dinner while we feverishly looked through our bank statements. Bobby and I both decided to pull money from our retirement funds to cover expenses. We made sure to set aside a reasonable amount to keep our garden going and invest in text resources to expand our knowledge, something I never would have done prior to the pandemic. My idea of what a good use of money was started to change as I looked more toward permanence.

We soon discovered an integral book by one of the pioneers of permaculture, Bill Mollison, whose explanation for why he designed the agricultural system helped us understand our own motives. “I began to protest,” he explained of the societal issues he saw all around him, “but I soon decided that it was no good persisting with opposition that in the end achieved nothing. I withdrew from society for two years; I did not want to oppose anything ever again and waste my time. I wanted to come back only with something very positive.” As we read his words, it felt like we were sitting around the campfire with like-minded friends. It was a bright spot in a dark, dark winter. When my depression got particularly bad, we started giving each other lessons on the chapters we had read.

Our garden fueled us, not just with the small harvests we started to reap, but emotionally and intellectually as well. It brought us closer together as a couple and created a shared passion we could focus on as the world fell apart around us. It made us feel like we were doing something about it all, even if it only extended as far as our closet. We came to see that we had done exactly the same thing our permaculture predecessors had: We had withdrawn, and come back with something positive. Not by choice, but all the same, we had.

In a very real sense, it gave us both routine and pattern as the weeks bled into each other. I was reminded how awfully simple life can be: food, water, sunlight. Every plant was different, and required different conditions to survive. Perhaps we were like that, too.

Maryellen Groot is a writer and educator in Massachusetts.