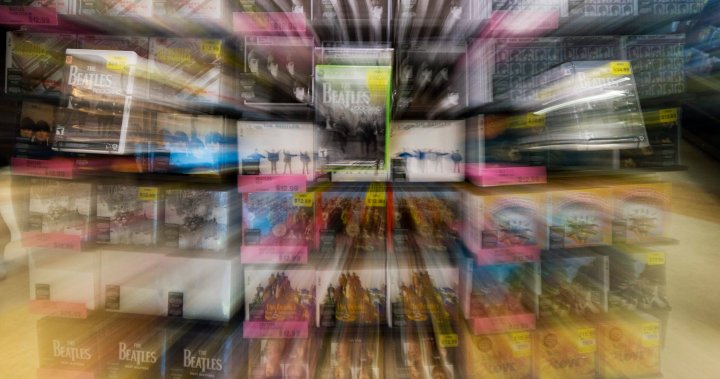 I first saw my first compact disc in March 1983 when the radio station where I was working got its first player and half-dozen discs.

We were so enamoured with the new technology that we launched a Saturday night album feature program when we played a CD in its entirety. It was a useless exercise, really, given that the high-fidelity capabilities of the CD far outstripped those of an FM radio signal.

Still, it was cool to be on the cutting edge of something.

We — and I cannot emphasize this enough — were also DONE with vinyl. It’s no exaggeration to say that the records we were buying in 1983 were far inferior to those purchased in 1969. The quality of the material that went into making vinyl records had plummeted since the oil crisis of the early 1970s. As oil became more expensive, so did petrochemical byproducts. And that meant looking for ways of trimming manufacturing costs for records.

The standard procedure was to use recycled polyvinyl chloride, which introduced impurities into the mix, resulting in clicks and pops right from the pressing plant along with annoying low-frequency rumbles.

Records were thinner, scratched easily, and wore out more quickly. “Cue burn” — that annoying scratchy, crackly sound that you heard when you first dropped the needle on a record — developed sooner. So when CDs came along with the promise of perfect sound forever, music fans were seduced.

My collection started slowly and only began in earnest after I could afford to buy my own CD player in 1987. After that, an unreasonable amount of after-tax income went to buying compact discs. Today, I have what I call my “CD vault” that holds something close to 10,000 discs on shelves and bespoke drawers. As you can see, it’s now overflowing. I’ve long run out of room.

I’m not sure when I started falling out of love with CDs. It may have begun when I discovered the illicit thrill of the original Napster. Then came legitimate cheap downloads via iTunes, which eliminated the need to rip CDs to my new iPod. When streaming started to appear in the late 2000s, I bought fewer and fewer digital songs and albums. Purchases of physical product were reserved for vinyl and box sets. I became annoyed at bands who insisted on sending me CDs, insisting instead on links to an online source.

Heck, I didn’t even notice that my last two cars came without a CD player. And when I accidentally discovered my latest vehicle has one, I was even somewhat miffed. Why am I paying for something I’ll never use?

Then last week, I was gifted a still-unreleased CD from an artist I very much admire. On the way home, it occurred to me that I could listen to it in the car. If I’m honest, it was pretty cool — and it sounded great.

This got me thinking: Why did I so ruthlessly abandon CDs all those years ago?

Well, their shortcomings, obviously. Which were …?

The fact is that CDs just work. You shove them in the slot or the drawer and they automatically start to play. Audio quality is excellent and dependent only on your speakers or headphones. CDs almost always sound better than an audio stream. They come with artwork and liner notes just like vinyl. Once you buy a CD, it’s yours forever. You can listen to it as many times as you want forever without fear of it suddenly disappearing from your collection. CD players don’t crash, taking all your music with them. And finally, the artist benefits. The revenue return on CD sales is far, far greater than any artist sees from streaming.

CDs become even more attractive when you look at the current price of fresh vinyl. Supply chain issues have pushed the retail price of new records well beyond $40. I’ve seen single regular issue LPs selling for $60 or even $70. That’s insane, especially when you can buy the CD version of that exact same album for less than $15.

A quick look at the most recent Canadian sales data from MRC (the watchers of everything involving music consumption) shows that CD sales have ticked up a very healthy 21.3 per cent from this point last year. True, raw unit numbers are a fraction of what they were 20 years ago when the compact disc was at its zenith, but enough product is still being sold for labels to justify manufacturing, warehouse, distributing, and selling music this way.

(Sidebar: The three major labels are currently collectively seeing about 65 per cent of their revenue come from streaming. CDs are grouped with vinyl and a few other categories in the remainder.)

Maybe, then, it’s time to consider our CD collections again. We just might find that we’ll fall in love with them all over again.

Alan Cross is a broadcaster with Q107 and 102.1 the Edge and a commentator for Global News.